When Rolex revises a watch, we can usually pretty much bet that it is going to create a stir within the collecting community. Even small changes are greeted with applause and disappointments…sometimes both at the same time. The new Rolex Explorer, announced in Baselworld 2016 is no exception. Curiously, it bears the same reference number as its predecessor, both are Ref. 214270, and changes are subtle, but in our view intelligent updates. Here is our hands-on review of the new Rolex Explorer Ref. 214270. As early as the 1930s, explorers and mountaineers who attempted to summit Everest have been known to wear Rolex Explorers. Rolex created the Explorer in honor of Edmund Hilary and Tenzing Norgay’s cresting the summit of Mount Everest in May 29, 1953. Interestingly although Rolex was the official supplier to the expedition, so was the English watch company Smith’s. Norgay wore his Rolex to the summit (the watch can be viewed at the Rolex Museum in Geneva) and Hilary wore the Smith’s. And due to a pact made by the pair never to reveal who was the first to actually summit Everest, we will never know which watch made it to the top first.

But the character of the Explorer lies within its name and its usage. Intended for rough and tough use, in temperatures as low as -20C to as high at +40C, and even beyond, in snow, sleet, rain, sun, and high altitudes. It  not only needed to work under these extreme conditions, but it needed to perform to chronometer specifications. It is a watch designed for the rugged. A Rolex promotional shot of the new Explorer.

The defining characteristic of the Explorer is the dial. It was always a black dial, with a large luminous triangle marker at 12, bar indices for the hour markers with Arabic numerals at 3, 6, 9. All Explorers bear this identifying characteristic. But each is slightly different according to the trends of the day.

Comparing the new and old 214270, the dials look almost identical. The main differences are the hands, which are now made longer, and slightly larger. This will please many Rolex fans who were disappointed that when the case was enlarged going from 114270 to 214270 (36mm to 39mm), the enlarged dial resulted in hands which slightly too short, not quite reaching the indices. This was an odd look and created to what to many was an excess of negative space on the dial. The new 214270 addresses that. The dial of the new Rolex Explorer Ref. 214270. Note the minute hand and the sweep second hand now overlap with the indices, an improvement over the old 214270’s slightly shorter and smaller hands.

The dial looks tighter, the aesthetics are more balanced between the size of the markers, the hands and the negative space of the black dial. It remains superbly legible.

Chromalight is a Rolex exclusive, some sources say it is also made by the makers of Superluminova. Its lume glows blue instead of the characteristic green. Rolex claims the lume to last longer than the standard SuperLuminova. Interestingly, the even earlier 14270 used tritium for its lume until about 1998, when legislation mandated a switch to a non radioactive luminous material, and Luminova was used. An improved version called SuperLuminova was introduced in 2000, which Rolex used untill it was replaced with Chromalight in 2008 for all watches with lume. The blue lume of the Chromalight glows blue, and is claimed to be longer lasting than the standard SuperLuminova.Photo supplied by Rolex.

The movement is the Rolex manufacture Caliber 3132. As the Explorer does not have a display case back, the movement cannot be examined from the back. We did not have the watch on hand to have it opened to inspect and photograph the movement. But being somewhat familiar with Rolex movements, the 3132 finishing will be to a very high engineering standard, with attention to detail being focused on ensuring a highly reliable, rugged and high precision operation. Typically, Rolex movements are not finished with traditional decorative finishing.

The 3132 is equipped with a Parachrom hairspring and Paraflex shock absorbers. All Rolex patented technology, which although is loosely based on standard technology for hairspring and shock absorbers, carry Rolex refinements. The 3132 is certified to COSC testing, as well as the Rolex Superlative Chronometer standards, which specifies a more stringent +2/-2 second a day timing result, performed after the movement is cased.

The space of the ultimate tool watch is one owned by Rolex. Some enthusiasts claim Rolex invented the space. Others may not agree. But there is no denying that Rolex is the mainstay in the space. King of the hill, so to speak.

All Rolex watches are well engineered. The level of industrialization is amazingly high. And the quality of the watches are certainly one of the best. Also, no other watch comes close to the resale value of a Rolex sports watch. This is a very big advantage to Rolex.

But the genre of tool watches is extremely wide and competitive. We have done several surveys of tool watches. Of course, these are not exhaustive lists, but begin to touch on what the genre can offer. Please see here for Tool Watches and here for Sports Watches for the reviews. From this list, perhaps the pick which matches the adventurer spirit is the Tudor North Flag (US$3,676 in bracelet, approximately S$5,000). The North Flag has a date and a power reserve indicator. As is the second tier offering from the same Rolex parent, it is specified to a lower level. For example regular stainless steel (Tudor does not specify the steel used, but we have it on good authority that it is the standard 316L) is used for its case compared to the 904L steel used by Rolex.

In our view, the best competitor to the Explorer comes probably from within. The price for the new Explorer remains unchanged at S$8,770 with GST, which to us represents good value. Another interesting alternative might be the new Rolex Air King Ref. 116900 (S$8260 incl GST). The Air King is similarly priced to the Explorer, but the design intention is not for rugged use. It should still suffice for “armchair adventurers”…although truth be told, Rolex Oyster cased watches, now all COSC and Rolex Superlative Chronometer certified are all sufficient for light, non-extreme adventure use. The Air King also has no date, but the case is slightly larger at 40mm in diameter, and rated to the same 100m depth rating. And features a similar Explorer dial. So it has Arabic numerals in polished steel with Chromalight infill and the inverted triangle, but in place of the bar markers, it uses Arabic numerals for the 5 minutes markers which are transfer printed. The dial looks a bit more crowded. The Air King has lower shock resistance than the Explorer, but is amagnetic as it has a magnetic shield (resulting in a case which also 2mm thicker)

Another comparison might be to the Rolex Submariner Ref. 114060 (S$10,030 incl GST). 40mm case, no date, stainless steel case but with a ceramic bezel and higher depth rating of 330m vs the Explorer’s 100m. The additional cost goes to the increased depth rating, making the Submariner a true diving watch

Also the Rolex GMT Master II Ref. 116710 (S$11,300 incl GST). The GMT Master is also 40mm in case diameter, 100m rating and has a ceramic bezel, a cyclops equipped date and features the ability to read 3 timezones (a second timezone is available on the 24 hour hand, and the third can be read from the rotating bezel).

And of course, the Rolex Explorer II Ref. 216570 (S$10,880 incl GST). It is designed on the same principles. It offers the same rugged, reliable, high precision as the Explorer, but although it says “Explorer” on the dial, the aesthetics are totally different. The Explorer II does not even feature the typical Explorer dial. The 3, 6, 9 markers are bar instead of Arabic and circle markers are used for the rest instead of bars. The Explorer II’s markers are also all equipped with Chromalight infill. And the inverted triangle in place of 12 is present. In addition, the Explorer II  is offered a larger case size of 42mm and rated to 100m. It also features a second timezone via a 24 hour hand. The Explorer II also is equipped with a date and a Cyclops magnifier to view the date.

What intrigues us about Rolex Sports watches. Each is created for a specific practical application, demanded by professionals in the field. The Submariner and Sea Dweller were in response to COMEX and professional diver needs. The GMT Master and GMT Master II in response to the requirements of commercial flight, directly to the demands of pilots of Pan Am Airlines. The early chronographs were created for wartime flight timing, and later, the Cosmograph Daytona for the use by racing drivers to time their laps. And of course the Explorers for the use by adventurers and explorers the world over. No other watch company can offer this tight linkage to professional use as a basis for design. And no other watch company can match the resale value of a Rolex tool watch, and hence the collectability of these watches. 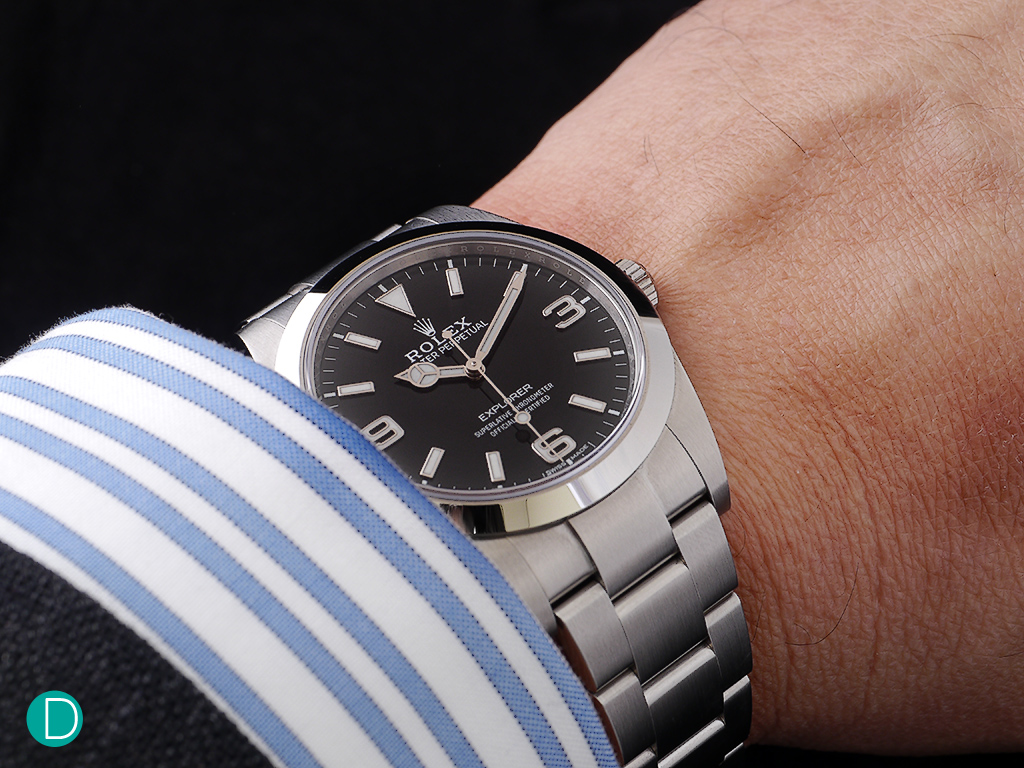 The Rolex New Explorer on the wrist. 39mm never felt so comfortable and a tool watch look so cool.

And so we have come to love the Explorer. The dial is magnificent. The design, with the use of Arabic numerals mixed with bar markers, and the un-mistakable inverted triangle at 12 is a study in clarity and legibility. Being a Rolex, one would expect the manufacture quality to be first class, and indeed the Explorer does not disappoint. It is now a classic. An icon. A legend. And we are in awe of Rolex to make just minuscule enhancements on the Explorer, not even changing the Ref. number, but with improvements which are meaningful and worthwhile. And also for keeping the price of the new 214270 the same as the old. Bravo and chapeau!