Imagine you had travelled back in time to 90 years ago; it is the year 1927, where the technology of GPS is non-existent. You had just set a double record for the first solo and longest nonstop transatlantic flight from New York to Paris. After the 33 hours and 30 mins of flight time, back on ground, you realized you completed your feat without the use of an accurate watch, and that you have your lucky stars to thank for surviving this death-defying act.

After his charmed journey as described above, the young American pilot Charles Lindbergh who flew the “Spirit of St. Louis” reached out to Longines, who was the official timekeeper for the World Air Sports Federation at that time, to develop a wristwatch to meet the fundamental needs of an aviator. The watch was to be able to accurately and quickly determine the longitude of the aircraft during long distance flights. The result was the Lindbergh Hour Angle that birthed in the year 1931, first introduced as an aeronautical innovation so that pilots can determine the longitude of their long-distance flights and find their geographical position with ease. This year, Longines celebrates the 90th anniversary of the above-mentioned transatlantic flight flown by Charles Lindbergh. During Baselworld 2017, the brand announced that there will be only 90 numbered timepieces made available for sale for this special edition of the Hour Angle watch.

Presented in a titanium case and black PVD bezel this year, the 90th anniversary piece stays however largely similar to the non-limited edition version.

The main function of the watch remains unchanged; by using a sextant to determine latitude and solar time at the present location, and with a nautical almanac on hand as a guide to “offset” the equation of time, the pilot can use the hands, bezel and inner rotating centre dial to calculate the hour angle difference, which corresponds to their current longitude. The regular edition of the Longines Lindbergh Hour Angle.

As the case is considerably large at 47.5mm, the titanium material on this limited edition piece allows the weight of the case rather light on the wrist, which proves to be a huge improvement point to the watch.

The bezel is updated to a modern PVD one, which looks less busy, compared to the original version. Legibility of all components on the watch was of utmost importance for the pilot in the 30s, but the function of the Hour Angle watch today is almost superfluous and it remains mainly as a yearning piece of history not to be forgotten. As a result, the 90th Anniversary edition is easier to the eye, but is less legible as an instrument. Reintroduced in modern cues, the bezel for this limited edition piece comes in black PVD.

The numerals on the circular-brushed silver main dial read up from 15 to 180 degrees, showing an increase of “15” at every hour interval. This is because the earth turns 180 degrees on its axis every 24 hours, and thus an hour would correspond to 15 degrees. The reading of the hour angle on the main dial is used together with the position of the minute hand.

Likewise, the bezel shows the numerals from 1 to 15 at every hour marker. The reading using the bezel is used together with the position of the hour hand.

The galvanic black rotating centre dial was also been given the contemporary treatment. Comparing it to the original version, the 90th anniversary piece looks muted and mellow, which is easier on the eye.

The hands are unchanged in “Breguet” style, only this time it is rhodium-plated in silver instead of blue-steeled. 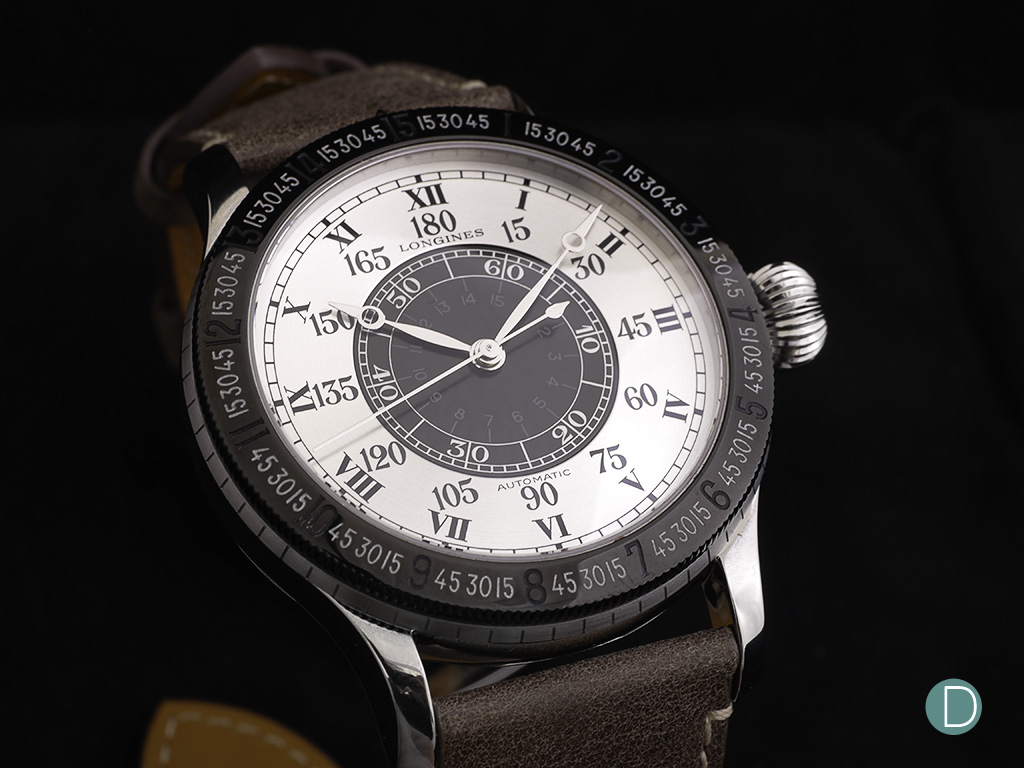 The Lindbergh Hour Angle Watch – 90th Anniversary.
The time on this watch is used to demonstrate how to read the longitude at solar noon of this location.

To read the longitude of the pilot’s position, the pilot will need the time at Greenwich (UTC). He does this before he starts his journey by synchronising his watch to the UTC at noon. As he travels, he keeps his watch at this time. At the location where he needs his longitude, he will wait for the sun in its highest position in the sky which is the solar noon, and simply reads the time off his watch. And by a set of calculations we show below, he can determine his longitude. This is how.

The design of the whole of The Lindbergh Hour Angle Watch takes into account the fact that the Earth revolves its axis through 360° in 24 hours, or through 180° in 12 hours, through 15° in 1 hour and through 15’ of arc in 1 minute. Consequently: The hour hand indicates 15° per hour. One complete circle of the dial (12 hours) is equivalent to 180°. The minute hand indicates 1° per 4’, in other words 15° per hour. Each of the 15° is subdivided into four sectors of 15’ of arc. All these indications are engraved on the rotating bezel. One complete circle of the centre seconds is equivalent to 15’ of arc. The rotating central dial is divided into 60’’ and 15’ of arc.

So at the solar noon, when the sun is highest where he is, he reads the time. In this example on the watch shown in the picture immediately above, it reads 10 hours, 8 minutes, 37 seconds. He consults his nautical almanac chart and finds the equation of time for the day in question. In this scenario, we hypothetically takes it that it reads minus 4 minutes and 30 seconds. The pilot will then require to move the bezel 4 graduations to the left. These graduations represent the minutes engraved around the case.

He reads the longitude as follows: The caliber L699.2 that can be seen from the hunter style case-back.

The movement of the 90th anniversary reissue remains unchanged from the non-limited edition Hour Angle watch, with the self-winding mechanical movement Caliber L699.2 based on the ETA A07.L01.

The movement comes with 24 jewels and it functions at 28,800 vibrations per hour. A power reserve of 46 hours can be expected from this timepiece. The finishing of the movement can be seen from the case-back when the catch of the cover on the hunter style back is ejected by pressing on the inconspicuous knob just below the crown. A piece that’s ever-ready to invite inquisitive stares when it’s on the wrist.

We were pleased to see the Hour Angle watch being revived again this year. Staying true to the spirit of innovation that had initially constituted to the creation of this piece, we feel that this year’s improvements such as the case material and the monochrome approach to the watch made good sense for the modern day.

The Lindbergh Hour Angle Watch is undoubtedly one for the connoisseur. Alongside with the other discernible models in the Longines Heritage collection such as the Flagship Heritage, Legend Diver and the Avigation Type A-7, it will remain as a worthy perennial favourite for watch collectors. A model of the first Longines Hour Angle Watch is displayed at the Longines Museum in Saint-Imier.

Sold in an exclusive presentation wooden box case with nameplate, along with a brochure and Charles Lindbergh’s reproduced map sketch, describing the history of the timepiece.