There are many aviation-themed watches that are created by a number of watch brands, which come in a myriad of sizes and designs. But when it boils down to the truly iconic ones, there are not many brands or collection out there that can match the ones that are produced by IWC. Not only does IWC’s Pilot’s Watches feature different styles, such as the Big Pilot or the Top Gun Ceramic, but the core models in the collection still maintain its timeless and classic design. And in this year’s SIHH, IWC had recreated an interesting reiteration of the Pilot’s Watch: the Automatic 36.

As its nomenclature suggests, this particular Pilot’s Watch is fitted with a 36mm case. This is similar to the Pilot’s Watches that IWC had produced in the past, such as the likes of Mark XI and XII. In fact, the entire watch is a reminiscence of the earlier iterations of the Mark collection, with its timeless and clean aesthetics that were so popular with collectors and military users alike. However, before we continue to drone on and on about those classic IWC Pilot’s Watches, we shall put that aside and instead focus on the star of the show today.

The case, hands and dial 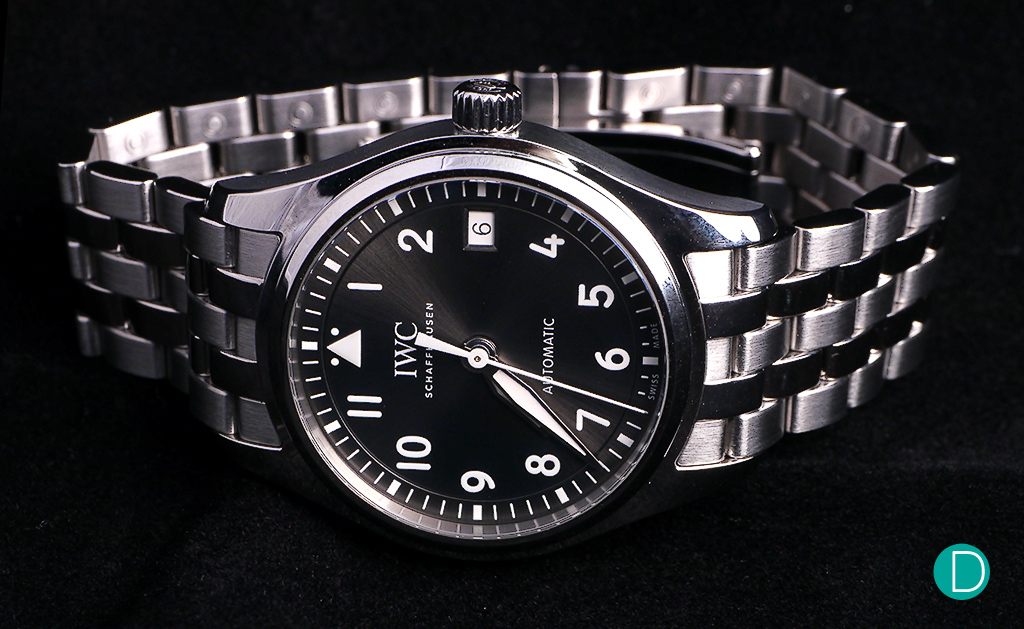 The IWC Pilot’s Watch Automatic 36, fitted with a steel bracelet

The Automatic 36, at the first glance, reminds us of either a reduced version of the Mark XVIII, or a modern version of the Mark XI or XII. It retains the classic, timeless design that has been featured on countless IWC Pilot’s Watches over the years. Interestingly, it does not look outdated, despite sharing similar aesthetics to watches that have been around for a good half a century. This perhaps can be attributed to the fact that it is a simple design, and one that will not go out of style or fashion. In fact, we think that such classic watches will retain the same looks many years down the road, as it was a few decades back.

For the hard-core IWC fans, one of the main highlights of the this piece would be the inclusion of the number “9” on the dial. This bit was excluded in the Mark XVI and XVII, for some reason, to the dismay of some ardent fans. But we are glad that they have put it back into this year’s novelties, which include the stunning Mark XVIII, and it certainly makes the dial look more complete. One variant of the Automatic 36, with a silver dial and black indices.

Another interesting aspect of the dial is its design, in which it is segregated into two portions – the inner ring with the Arabic numerals, and the outer ring that contains the minute markers. The separation makes the watch looks cleaner and allows us to tell the time a bit easier, as the hour indices are not placed too close to the minute markers.

The hands, notably, are similar to the ones that were fitted to the Mark XVIII. It is nice and definitely legible, but we feel that it would been a tad more fascinating if they had fitted the watch with rectangular hours hand and thin sword-like minutes hand that were similar to the ones that we have seen in the earlier iterations of the Mark series. 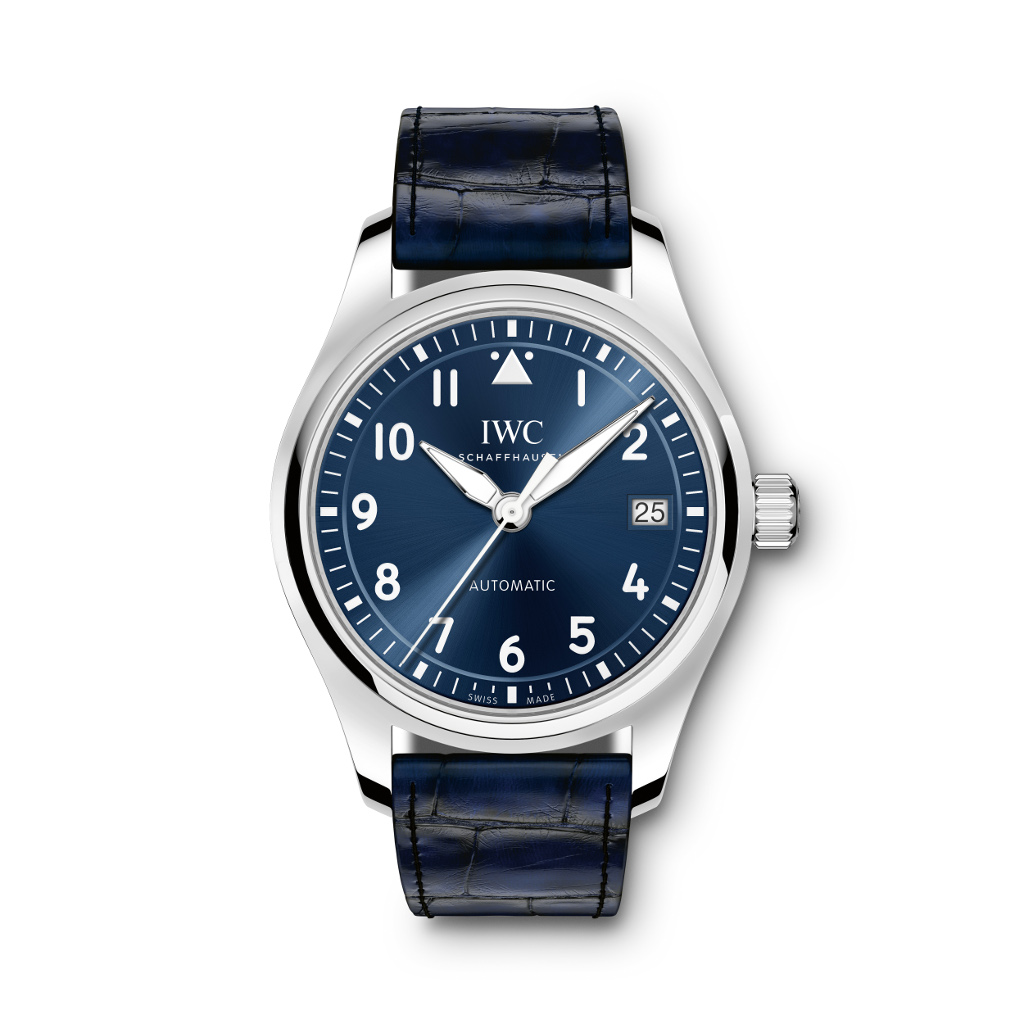 The watch comes with a few different dial variants, of which we actually prefer the grey dial version. It gives the watch a suave appearance, and we feel that the contrast is really beautiful on this one. Additionally, we think that the sunburst effect looks better on the grey dial as well.

Finally, the watch is fitted with a 36mm case. This is much smaller than the current Mark XVIII, which is cased at 40mm. Other than the smaller case dimension, the watch case is finished a little different. As opposed to the brushed finish that we see on the Mark XVIII, some portions of the case on the Automatic 36 features mirror polishing which makes the watch look a bit dressier. Well, it is a 36mm watch after all, and by today’s standard, it is one of the most appropriate sizes for a classy dress piece. Simple, subtle, and powered by a solid movement.

The watch is powered by the Calibre 35111, which is based upon the Sellita SW300. The movement features a date indicator, and it boasts a decent power reserve of around 42 hours. It also features a central hacking seconds to ensure accuracy during adjustments.

In addition, it is fitted with a soft-iron inner case to protect against magnetism. This is similar to the watches in the Mark series, in which they were all (including the predecessors such as the Mark XI) fitted with the inner case as per the specifications of Britain’s Ministry of Defence in the past. The watch looks especially good, when it is paired with a suit.

The IWC Pilot’s Watch Automatic 36 is an incredibly stunning watch, no doubts about that. We like its size, and the classic design that will remain in fashion in time to come. It is seemingly perfect, especially when the watch is paired with a nice suit.

Honestly, some people might think that 36mm is a bit too small for a guy. Well, it ultimately depends on the size of your wrist. For a typical Asian, we think that the 36mm watch looks perfectly fine on our wrists. It sits pretty nicely and it feels very comfortable as well.

The watch is also paired with either the steel bracelet, or a Santoni leather strap. We feel that the latter looks better, especially when it is worn as a dress watch. The combination of the brown leather strap and the grey dial accentuates a certainly classiness and coolness about this timepiece, and it exudes this slight aura that makes you want to take second glances at your watch. Oh, perhaps seductive is the right word to use in this scenario.

Priced at S$6,250 for the leather strap variant and S$7,650 for the steel bracelet option, we believe that the IWC Pilot’s Watch Automatic 36 is a reasonable timepiece. It will certainly be an interesting choice for both young and seasoned collectors, for there lies an interesting heritage behind this timeless looking timepiece.