Launched at SIHH 2017 is the IWC Da Vinci Tourbillon Retrograde Chronograph, one of the flagship models from the Schaffhausen manufacture and face of the revamped Da Vinci collection which is a departure from the barrel case shape and the embracing of the original round case. The Da Vinci Tourbillon Retrograde Chronograph features a flying tourbillon (which while isn’t a first for the maison introduces a new innovation never before seen for the manufacture), namesake retrograde date display, and a flyback chronograph, all powered by a new self-winding in-manufacture calibre 89900 with new technical features which catapults the Schaffhausen watchmaker into the company of some fairly prestigious names. It’s a pretty common occurrence for dials of tourbillon chronographs to look a little busy but IWC manages to keep indications for the Da Vinci Tourbillon Retrograde Chronograph pretty well choreographed. The retrograde date display is located to the left of the face in a gentle arc which serves as a design element to balance the brand logo on the right.

A 12-hour totalizer to record the elapsed time similar to the one the IWC Da Vinci Chronograph Edition “Laureus Sport for Good Foundation” sits at 12 o’clock, aesthetically mirroring the flying tourbillon at 6 o’clock; a feature which also serves as a subsidiary seconds-hand thanks to its complete orbit in a single minute. 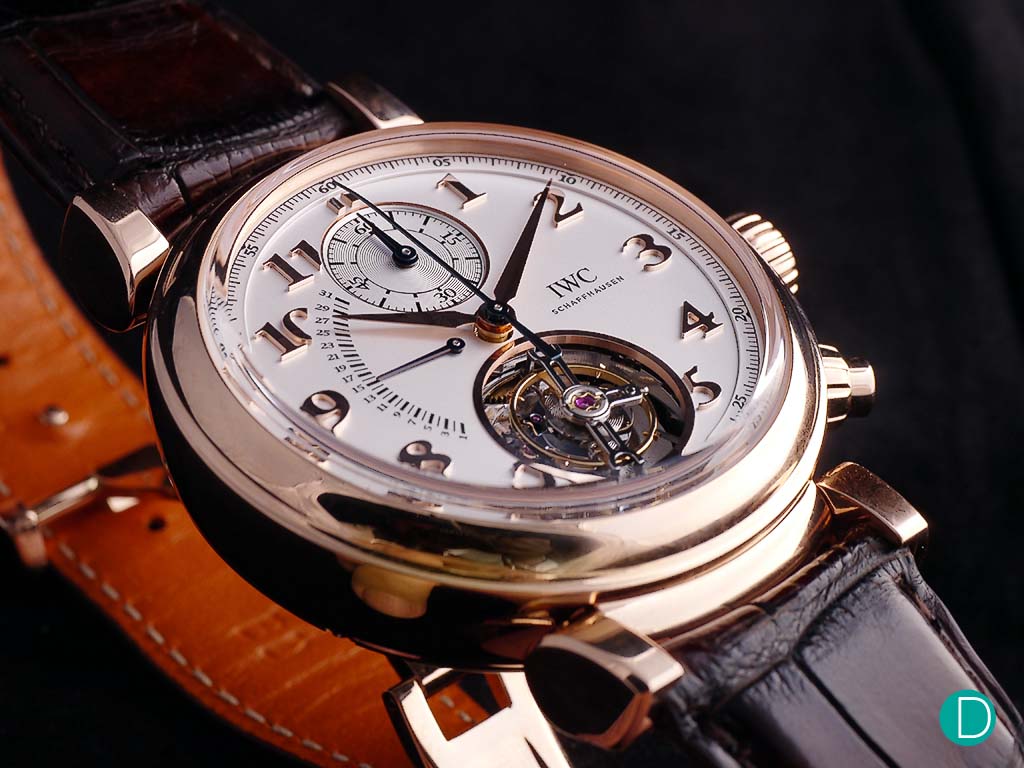 Everything is housed in a 44mm-wide 18k red gold case with a silver-plated dial and equipped with articulating lugs which not only makes the large-ish watch eminently more wearable (since it tapers around the wrist as you tighten the watch) but also serves as a defining feature of the new SIHH 2017 IWC Da Vinci collection. The Movement of the Da Vinci Tourbillon Retrograde Chronograph

One of the more interesting aspects of the the new IWC in-house calibre 89900 is the flying tourbillon, made unique thanks to the fact that it is a hacking tourbillon. Historically speaking, the tourbillon cage was a technical challenge which hampered early attempts to put a stop-seconds mechanism in tourbillon complications for two reasons. First, a stop-seconds complication is typically designed to use a small lever which puts the brakes on the balance wheel when the crown is a time adjustment position, the presence of the tourbillon cage around the balance negated this technical solution. Second, a tourbillon rarely features hacking because it is considered a fairly fragile complication (prone to shocks and knocks) and the act of “hacking” tends was theorised to be too stressful for the complication. Thanks to the new innovation, the IWC Da Vinci Tourbillon Retrograde Chronograph becomes a precision tool capable of to-the-second accuracy unlike most other tourbillons, this is made possible with two levers which grip the balance wheel much like calipers of a brake when the crown is pulled out- stopping the balance means stopping the watch from keeping count of the seconds.

With this innovation, IWC Schaffhausen joins the ranks of two other watchmakers who have managed this technical feat – A. Lange & Sohne, who pioneered the technique and Moritz Grossmann; both hailing from the German Glashutte region. Another new innovation can be found in the Da Vinci Tourbillon Retrograde Chronograph’s calibre 89900 and it is claimed by IWC to contribute significantly to the impressive 68 hour power reserve, made possible by another new first for the Schaffhausen manufacture – diamond-coated silicon pallet fork and escape wheel. This material has been used previously by luxury watchmakers Ulysse-Nardin and Cartier which boasts robust nature of diamond with the magnetic imperviousness of silicon, the results of which are greatly reduced friction (contributing to more efficient energy transmission) and the protection from ambient magnetic waves which can affect chronometry of the escapement.

The IWC Da Vinci Tourbillon Retrograde Chronograph (Ref. IW393101) has a retail price of SGD156,000 (incl. Taxes). While it is considered to be one of the pricier offerings from the Schaffhausen manufacture, the flagship of the newly revamped SIHH 2017 Da Vinci collection is home to two of the maison’s latest milestones. Given the weight of value given to provenance, the Da Vinci Tourbillon Retrograde Chronograph has a good chance of becoming a signature legend for the maison. However, its vaunted technical features might also serve as an achilles heel because the brand is predominantly known for its “working man’s sensible watch” reputation. That said, IWC has often made waves by pushing the envelope of watchmaking in very practical directions, such as in the case of building a high horology rattrapante split-seconds chronograph amazingly on the back of an ETA 7750 but that’s a story another time.