Haldimann watches introduced in 2013 the first watch without a tourbillon from their collection. It is a very simple, yet classical gold or platinum timepiece with 2 hands. This year, the independent brand introduced a new H11, this time in steel, and the H12. The Haldimann H12 is the updated brother, featuring a “small seconds”, as a complication. With both pieces in steel, is there a trend of the market to lower the price? Or steel watches just tend to be more popular and desirable (having in mind the record-breaking prices for steel watches at the last auctions). We reviewed for you the H12 and the new iteration of H11. Haldimann H12 has a frosted midnight blue dial created especially for the steel case version. To obtain this finish it needs a tremendous amount of work.

There are not too many brands out there that can be tracked and followed through history as the Haldimann name can be. The brand’s name, as a watchmaking workshop, can be dated back to 1642. But the Haldimann family can be found in documents dating back to 1374. But it is not just a name to be followed in historic documents. The Haldimann manufacture is the oldest in Switzerland led and owned by the name-giving family. We can say that perhaps some of the ancestors’ knowledge was passed, from father to son or daughter, to the now living and working descendants. It may just the way of filing the burrs, or something else, but the idea remains a romantic and beautiful one. It makes a special connection, between you as a collector, your Haldimann watch and the entire Haldimann line. H12 is a subtle presence. To notice and understand the complexity of this simple looking watch requires a more attention as usual.

The modern Haldimann brand was established in 1991 by Beat Haldimann, in Thun, Switzerland. In 1999, Beat presented his first watch, the H104 “Three Rods” one-second regulator at Baselworld. And made history in 2002 with the H1 Flying Lyra, the first wristwatch with a central tourbillon above the dial. This magnificent piece is now part of the permanent exhibition at the Musée International d’Horlogerie of La Chaux­de-Fonds, Switzerland. Beat Haldimann, photographed in Baselworld 2017.
Apologies for the poetic license borrowed from the portraiture language of Martin Schoeller.

Haldimann also patented a detached escapement, which is a major breakthrough after 200 years from the Abraham-Louis Breguet’s invention (the principle is based on having the impulse and the locking function free from the direct influence of the driver, in this way the regulator has less influence over the oscillator and a higher precision can be achieved). The blue dial of H11 is available only for the steel version.

The design for the Haldimann H11 was presented in 2013, as the first wristwatch with central balance and central hours and minutes. It was the first Haldimann watch without a tourbillon, but not necessarily simpler. The balance wheel is placed directly below the hands’ pivot. The watch was released in gold and platinum.

Beat Haldimann decided to present two watches for 2017. The first, the H11, was released a few years ago but updated with a simple, satin finished grey dial. This new version comes with a new colour dial, in midnight blue. And with it, Beat also announced a sibling – the H12. The new H12 adds a lovely subsidiary seconds as a small complication. Although it was not necessary, the small seconds’ subdial gives H12 a special charm. The wrist presence is comfortable and subtle – as a dress watch should be.

The H11 and the H12 share the same 39mm case. On request, the watches can be made available in a 42mm case. One of the most important aspects of the Haldimann cases is the fact that they are produced in-house, in the home workshop in Thun.

Manufacturing in steel is a first for Haldimann watches. The three part round case is finished in a perfected polished surface. The lugs are straight, functional, aiming for perfection. The case has no other cosmetic or unnecessary elements. It is just functional simplicity with an exceptional finish. Why is that so important? We have to keep in mind that Beat Haldimann uses no CNC machine and everything is done by hand. Obtaining such a level of perfection is almost unbelievable. Haldimann H12 case, identical with H11 is manufactured full in-house without help of the computer aided machines. The simple-looking case is excellent proportioned.

But there is still an exterior case element to adorn the pure functionality of the case and that is the crown. The onion-shaped crown disrupts the possible monotony without being vulgar. The H11 and the H12 are optimal visually and technically balanced as is expected of and thoroughly appropriate in a dress watch.

The dial used for this year’s release is an unexpected combination of elementary functionality and painstaking finishes. A solid silver blanc dial is engraved with indexes, numerals and the Haldimann name. After engraving comes silver lacquering of the dial’s elements. The velvet appearance is obtained by hand applying of a silver powder. The midnight blue frosted effect completes the contrasting polished case in an elegant finale. An old hands’ shape, inspired by a vintage Haldimann pocket watch, was reused in an update and rejuvenate with new details. The prolonged heart shape brings, even more, romance to this exquisite dial.

The H11’s and the H12’s hours and minutes hands are, apparently, the most complex visible components of the watch’s face. The inspiration is drawn from a Haldimann pocket watch from the 18th century as well as a Haldimann wall clock from the 17th century, both with similarly shaped hands. The modern touch is the tip of the hands designed in the shape of a heart obtained by skeletonising the arrow tip at the end of the hands. This particularity is noticeable only by a closer inspection.

The small seconds sub-dial of the H12 watch is slightly lowered. This leads to a pleasant and useful contrast. Placed at 5 o’clock, the small seconds’ dial shares the same visual language elements as the big dial.

The difference between the H11’s and the H12’s movements is the presence of the small-seconds complication in the latter. The movements are, some would argue that is mandatory for a dress watch, mechanical hand wound calibres. The movement is made almost entirely by hand. No modern machined process is used. Even for the bridges and plates are fabricated using ancient machines and tools and not by modern CNC equipment. Beat Haldimann takes, rightly, a big pride from this. 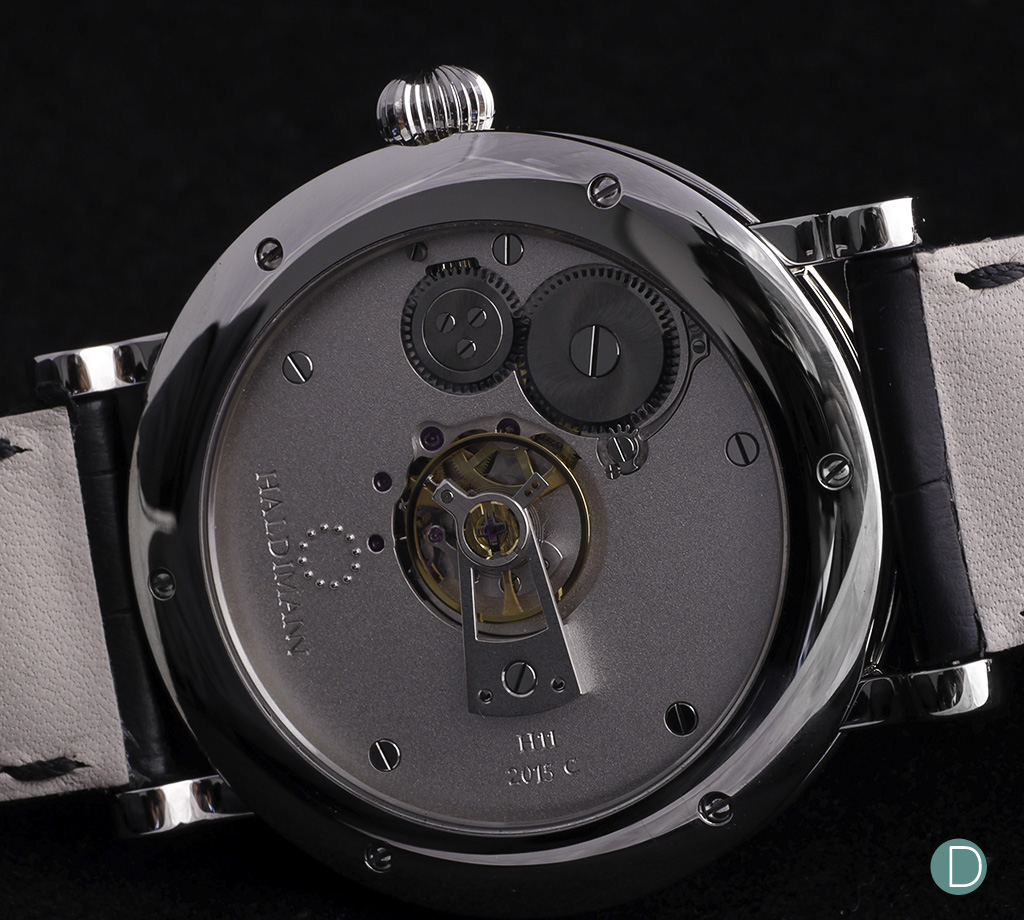 The Haldimann movement is created as an image of the dial where the telling time hands are replaced by a hypnotic game of the “suspended” balance wheel. Note the cross schock aborber developed by Beat haldimann.

The spectacular element is the centrally placed balance wheel. The wheel is highlighted by the frosted gilt finish of the plate, being almost suspended by a skeletonised balance cock. It features a proprietary improved cross-shaped shock absorber and the Haldimann’s escapement.

The H11 was the first watch with central balance and central hands. Now the H12 features the same hovering balance wheel directly below the pivot of the hands. It features flawless finishes: subtle polishing of the jewels’ sinks, snailing on the crown wheel and ratchet wheel and a frost mirroring the dial’s presentation. The movement is the watch’s second face.

The Haldimann signature on the movement is equally subtle and discrete. The name is engraved, but the logo of 12 raised dots is a nice elegant touch.

It is not easy to compare simple looking watches. Especially when simple means sophistication of the movement and refinement of the finishes. The first that comes to mind is the Philippe Dufour Simplicity. This exquisite timepiece is manufactured in an initial small series of 200 pieces. It is a huge number of watches if it is considered the fact that the movement is completely designed and finished in-house by the master himself. The main beauty of Simplicity’s movement is Dufour’s finishes. His perfect curved and highly polished bevelling is almost unmatched in the industry (and no, we didn’t forget Kari Voutilainen). The Cotes de Genève are a feast in the light. The movement is as perfect as any. Last year, three Dufour Simplicity were auction off achieving record prices. In the Christies Hong Kong Sale on November 28, 2016, a Simplicity 37mm white gold was sold at USD 256,503. The next day, at the Phillips Hong Kong Sale, a Simplicity 37mm rose gold was sold at auction with US$257,868 and another 34mm watch cased in white gold for US$225,634. The Dufour Simplicity is an investment, will never go cheap. But above all, it is a gorgeous piece with nothing to reproach. A collectors dream: double wrist shot of the Dufour Simplicity. The upper Simplicity in white gold, guilloche dial, 34mm case is on the wrist of Philippe Dufour himself. And the lower one with a lacquer metal dial, Roman numerals, in 37mm rose gold case belongs to the Deployant’s editorial director Peter Chong.

Another hand wound magnificent watch would be the A. Lange & Söhne 1815. The Lange comes in all three gold colours: pink, yellow and white. The watch is another example of simplicity and elegance, being a subtle wrist presence. At 38.5mm case diameter, the watch is in a good-for-today size being a classic watch in a modern dress size. The price can be found by request in one of the A. Lange & Söhne Boutiques. An excellent wrist feel and look, at 40mm diameter the 1815 is at an ideal proportion.

If we are still talking about the great names in the independent section of the industry, then we need to remember the Roger Smith Series 2. As an apprentice of the late master George Daniels, he transmits further the noblesse of Daniel’s timepieces in a personal and recognisable way. The Series 2 is made almost entirely in Roger’s workshop. What is particularly interesting at this watch is that it is easy to be placed for a connoisseur. A simple case with an even simpler crown makes room for the splendidly guilloché patterned dial. The 40mm case keeps inside a calibre entirely designed and manufactured in-house. The movement uses an improved version of Daniel’s co-axial escapement perfected by Roger Smith. The Series 2 retails for £100,890. The 3-dimensional layered dial is grandiose. Note the thick hands, which make legibility very good. And the contrast to the lacquered numerals and the flamed whitened dial.

With purity and heritage in mind, we thought of the Breguet Classique 7147. The watch is available with 40mm rose and white gold case decorated with Breguet’s signature fluted case. This is an easily recognisable timepiece: Breguet case, Breguet hands and numerals on a phenomenal grand feu enamel dial. A technical masterpiece is the sunken small seconds sub-dial at five o’clock. Powering the Classique 7147 is done by an automatic movement, well decorated and visible through the case back. The watch is priced for the rose gold version at US$21,500 and the white gold version at US$21,000, respectively. The Haldimann H11 and H12 are by definition, construction and appearance connoisseurs’ dress watches. The choice of small seconds presence is just a matter of personal taste. The watches are utterly simple just for an unadvised eye. A closer look reveals the tremendous number and quality of the finishes.

For the amount of finishes and innovation, the timepieces are well priced. Both variants have a gracious wrist presence. The purists can consider them as an ultimate grail of independent watchmaking.  What we can learn from this review is that “simplicity” is a very relative word, regarding this two watches. The Haldimann H11 and H12 Specification and Price