The quest to be the thinnest of them all has always been a bastion of excellence for ultra thin watches. Unlike the world of anorexic models, being an ultra thin in horological sense embodies the essence of accomplishing more for less, and also the spirit of subtle beauty. Needless to say, the difficulty of making an ultra thin movement is representative of the watch maker’s skills and technical prowess. While many put emphasis on the ‘waist line’ thickness, we evaluate ultra thins using a more all-encompassing criteria. And in this case, the Bulgari Octo Finissimo Tourbillon passes with flying colours.

The Bulgari Octo Finissimo Tourbillon, is a truly fascinating piece. The movement itself measures 1.95 mm thick, and with the case, the full watch is a mere 5 mm. It therefore earns itself its name of the thinnest tourbillon ultra thin in the market today, coming just ahead of the Arnold & Son UTTE which measures 8.34 mm thick. Apart from its stellar report card at being the thinnest tourbillon watch, we also like the Bulgari Octo Finissimo Tourbillon for its quality of finish and movement innovation. On the issue of thickness, some of us find that ultra thins are not complications in and of themselves. In fact one of our team members thought it silly to be in the arms race for the thinnest watch. Nonetheless, we will provide a list of notable thin watches so that we have an idea how slim this 5 mm Bulgari really is. But do bear in mind that some of these watches we are about to mention are automatics or have other complications as well. First on the list is the Jaeger-LeCoultre Hybris Mechanica 11, a self-winding tourbillon with minute repeater which measures 7.9 mm. Secondly, the Vacheron Constantin Patrimony Contemporaine Ultra-Thin Calibre 1731, a manual winding tourbillon with minute repeater 8.09 mm. Thirdly, the World’s Thinnest Tourbillon in 2014, the Breguet Classique Tourbillon Extra-Thin Automatic 5377, an automatic tourbillon, 7 mm thick. Taking into account that the Bulgari is a tourbillon only timepiece that is manual winding, the 5 mm thickness is still nonetheless a feat. The tourbillon is modified such that a part of the balance wheel regulating system is removed and the tourbillon is mounted on thin ball bearings versus a traditional pivot. Revolutionary in design, the movement is likely to be only serviceable by Bulgari and may come with the woes of being ‘new’, untested and unproven. That said, we have not yet heard of any complaints related to the watch, and if its a consolation, Bulgari is well-known for its stellar customer service. 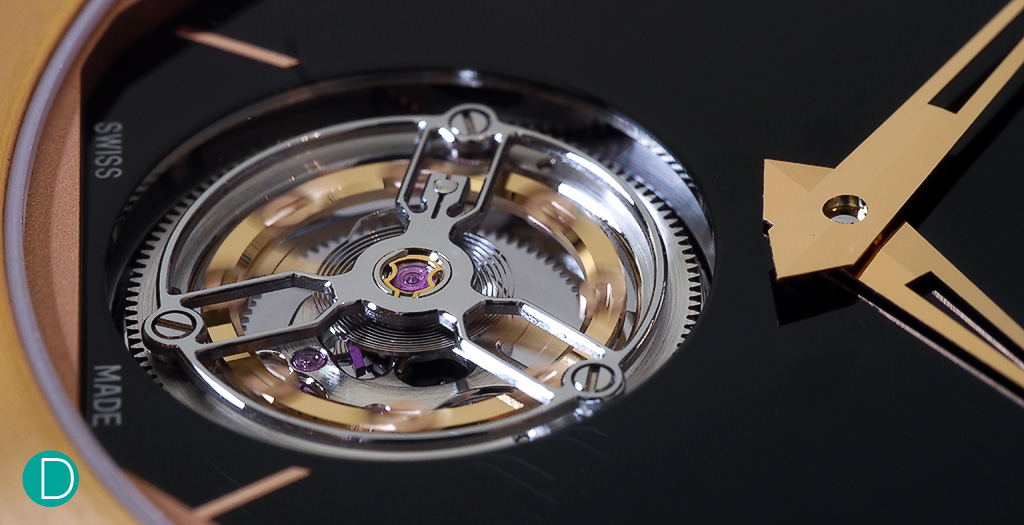 World’s thinnest tourbillon caliber BVL 268 , featuring the cage with its well finished arms. The organised symmetry on the hands resemble tuning forks, or propellers on an aircraft engine.

Apart from the revolutionary thin movement, the watch is aesthetically astute. While we are accustomed to the looks of round cased dress watches, the Octo case shape is surprisingly pleasant, as a dress watch with an element of wildness. We have featured here two variants to the Tourbillon, one in 18-ct pink gold and another cased in platinum. The crowns are capped with ceramic which complements the lacquered dial perfectly.

Side profile of the Bulgari Tourbillon, measuring only 5mm thick.

At first glance, it is easy for one to mistake the lacquer dial as an enamel because of the rich shine on its slightly glossed surface. The faceted dauphine hands keeps the dial side simple and highly legible, and some have said that the dial takes on art-deco style inflections. The case is a mixture of brushed and polish finishing, with polished lugs which use a step construction, which gives the case construction more depth and angles. Fittingly sized on the wrist, the Bulgari Octo Finissimo Tourbillon is fit for any occasion. We find the Bulgari Octo Finissimo Tourbillon a highly interesting tourbillon piece to add into anyone’s collection. It is versatile, classic and relevant to the modern man. Priced at USD$138,000, the ultra thin tourbillon is competitively priced and delivers more than its competitors.