Rolex is the largest and perhaps most traditional/practical of the Swiss watchmaking houses. Their most complicated watch to date is the Sky Dweller Annual Calendar, or some might argue the Daytona Cosmograph Chronograph. Here, we investigate a new release from a little known custom house by the name of Label Noir, who retrofitted a tourbillon into a Rolex Milgauss, but not before blackening the case first. Here is the release information. 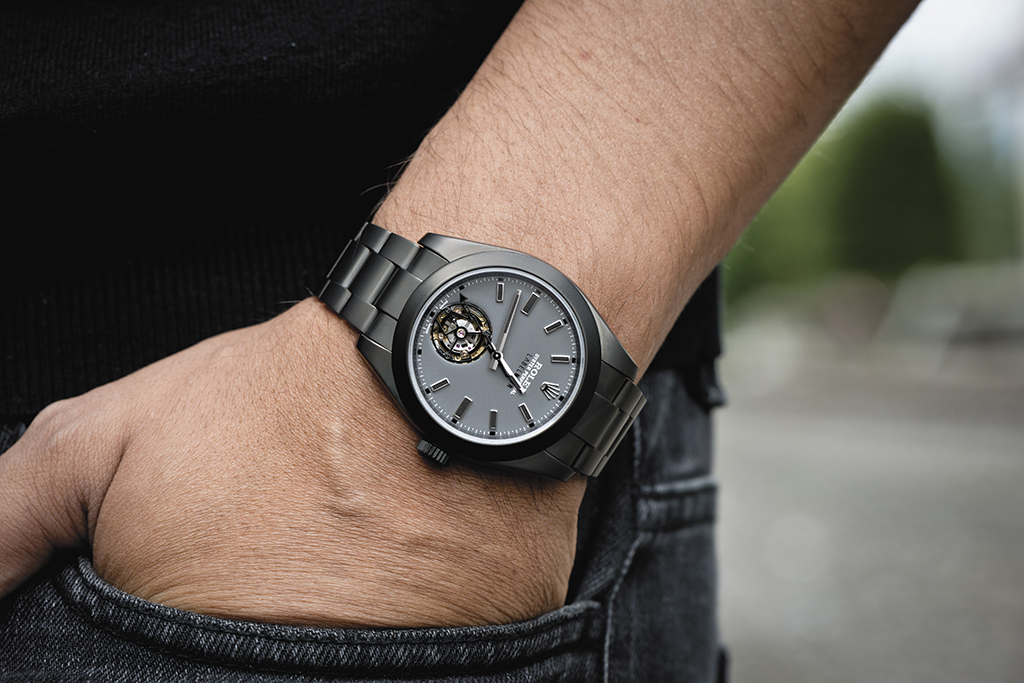 Imagine it! A tourbillon for your Rolex. Perhaps a wet dream for many collectors, but now you don’t need to imagine it. Its been realised. By a small bespoke custom house by the name of Label Noir. Established in 2011, the Label Noir provides personalization to the industry. From basics like the popular blackening of cases, to special dial executions and even to very unusual requests like moving the pusher of a Patek Philippe to another location. They even have a simulator which shows the extent of customizations possible and how it looks like on a mock up photograph. And now, their CEO and watchmaker Emmanuel Curti, have made a world premiere, and retrofitted a tourbillon into a Rolex. Is this the most complicated “Rolex” ever made? Perhaps, but in the running is also the Rolex Perpetual Calendar made by Franck Muller in the early days of his career.

Created as a special request by a somewhat “crazy” client, they began work of replacing the original Milgauss caliber from the client with a tourbillon in a size compatible with the space available. The idea was to keep as many of the original components as possible. The starting point is the base Milgauss. The Milgauss 116400GV carries the Rolex calibre reference 3131. A total of 51 components have been removed, 2 components modified and 94 components added.

To achieve this, it is necessary to rework the main plate, but they did so while retaining the factory number. Then the escapement is removed and a tourbillon cage is designed, made and transplanted into the movement. The tourbillon is flying and runs on a ball bearing, and makes the standard 1 revolution per minute. As this is done, the balance is slowed down from 28,000 bph to 21,600 bph.

Making this the first Rolex to sport a tourbillon escapement.

However, we note that this is style of transplant is not strictly new. Though not on a Rolex, I have personally known watchmakers like Richard Habring who have retrofitted a tourbillon into an IWC caliber as early as in 1998. And though not a tourbillon, Franck Muller himself have made a retrofit of a perpetual calendar with moonphase display as his graduation watch at the Ecole d’Horlogerie de Genève in 1978 into a Rolex Oyster Perpetual. The Millgauss Tourbillon comes with a sapphire glass back. Though we have also seen other watchmakers who have done this. See this Daytona which is retrofitted with a sapphire case back. And the case and bracelet itself is blackened by a DLC treatment. Label Noir says it is making this tourbillon retrofit available to other customers who can supply their own Rolex. And we guess, this not limited to the Milgauss, though we think it might be technically impossible to squeeze a tourbillon into a Daytona.

More information on Label Noir is available on their website.