Rado Ceramica gets a design update from Konstantin Grcic Many of us would probably recall the grainy Rado Ceramica advert from television and the theatre (audio artefacts and all – the hisses and static. Unchanged from the 1990s, the Rado Ceramica was perhaps the most futuristic watch with decidedly retro-classic marketing collaterals and it was the kind of timepiece which has remained relatively unchanged since it’s modern inception.

The beginnings of Rado’s flirtation with high-tech materials can be found in 1962, beginning with the DiaStar 1, the world’s first “scratchproof” watch, not built from ceramic but constructed with a type of hardmetal with sapphire crystal which we take for granted these days but it was a rarity in watchmaking back then. Eventually, the enduring yet luxurious aesthetic would become the cornerstone for Rado’s contemporary reputation. This unique proposition was further solidified in the 70s and 80s starting with a never before seen innovative case made from edge-to-edge metalised sapphire crystal and then eventual in 1986, high-tech ceramic we know and love today.

As early as 1986, beginning with the Integral, we start to witness the type of hyper-clean, minimalist aesthetic and integrated case-bracelet construction that Rado would become famous for.

While they are separate collections, the Integral marks Rado’s first foray into the use of high-tech ceramic. In terms of design, we start to see the straight bracelet. The dial uses thin baton indices to great effect, eventually doing away with hour markers in 1990’s Ceramica and keeping with the same ultra-minimalist aesthetic in the follow up Sintra in 1993. The Sintra doesn’t use ceramic but instead is a return to the brand’s roots in hardmetals and in this case, it uses titanium carbide. Nevertheless, the brand’s DNA and penchant for ultra-minimalism continues even till today with Konstantic Grcic’s new Rado Ceramica interpretation.

Today, the minimalist icon is re-invigorated with the talented industrial designer Konstantic Grcic. The new Rado Ceramic retains its iconic linearity and while the straight integrated case-bracelet returns, a new face accompanies the strong geometric timepiece. Konstantin Grcic’s limited edition model stands out for attractive typography and a new velvety matt finish which stands in contrast to the high gloss finish we have all come to associate instinctively with Rado. For nearly three decades high-tech ceramic has played a central role in Rado’s approach to watchmaking. The latest Rado Ceramica is the sum total of the brand’s innovations with a cool designer twist.

Limited to just 701 pieces, Konstantin Grcic’s new Rado Ceramic is designed with pilot watches in mind. However, we feel that the typography is reminiscent of vintage Rolex Explorer models like those used by Sir Edmund Hillary during his expeditions.

“In my opinion, the matt finish brings out the form of the watch much stronger. The design of the dials is bold and legible. I took inspiration from pilot watches – I like them for their straightforward, clear graphics.” – Konstantin Grcic

While both of Grcic’s designs appear to be a departure from Rado’s iconic minimalism, his sparse use of typographic elements interspersed with grayscale triangular indexes and white high contrast arrow at 12, serve to heighten the broad canvas of space on the dial while reinforcing its vintage appeal. It is our contention that 1990’s Rado Ceramica wouldn’t appear out of place from the myriad of Fitbits and smartwatches we see on many wrists today and so, this update to the latest Rado Ceramica is both trendworthy and counter-culture much in the same vein as the original was when it first debuted. Konstantin Grcic is best known for his Magis Chair One.

If the retro-futurist minimalist design is not your cup of tea, fans can opt for the model with small second subdial and date complication – in that variation, the latest Rado Ceramica becomes a statement of irony (albeit not on the same level as the mechanical hand-winding H. Moser’s Swiss Alp Watch S) because can actually pass of as one of those smartwatches with a graphical dial. All the monochrome hour numerals run in digital code-esque 01, 02, 03 and so forth, it might be an acquired taste for some but this author personally finds it fun. It’s a shame there are only quartz versions for now though one can wish for a mechanical version with an ultra-thin movement, that said, you could probably take the SGD2760 price tag and quadruple it.

There are four models to choose from, two for men and two for women. The women’s versions are smaller, featuring gilt details like diamond studs and silver accents in Ceramica high gloss black or white ceramic. Materially, ceramic is hard-wearing and highly scratch resistant so you aren’t prone to dings and scratches. Rado also uses a proprietary mono-bloc construction style for its ceramics making it more resistant to shattering as well. 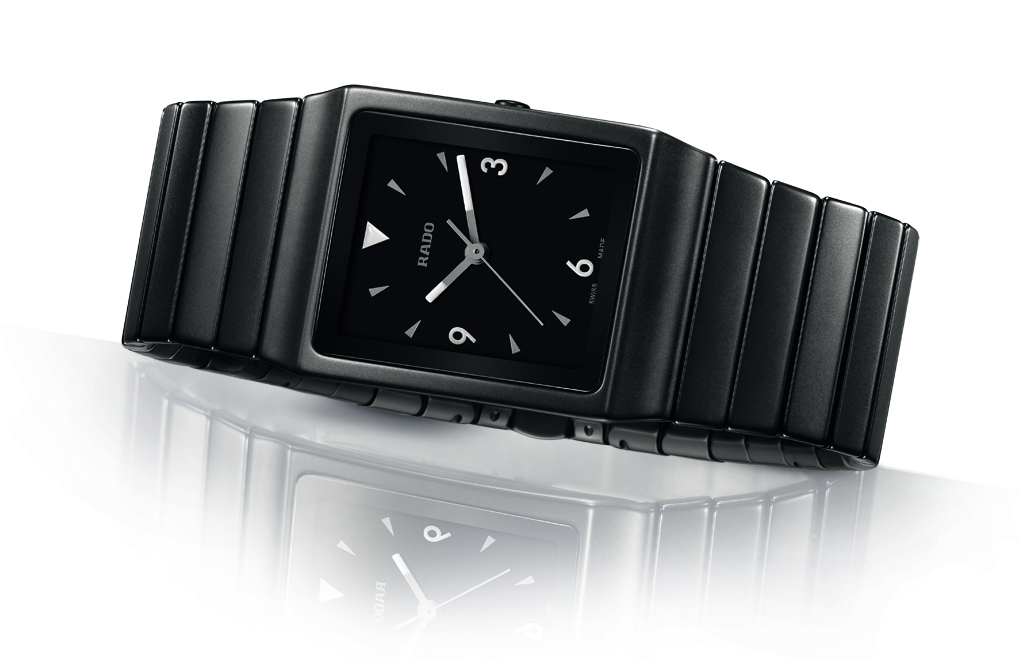 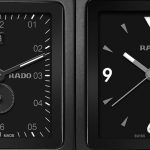 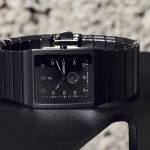 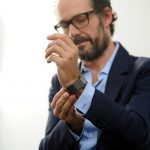 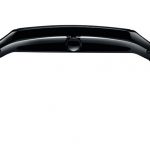 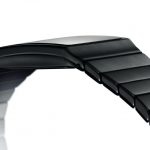 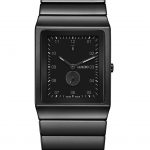 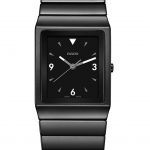 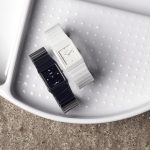 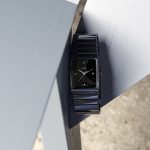 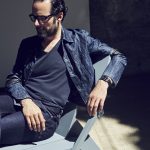 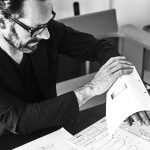