Just when we thought the Apple revolution was over with its dominance in the mobile industry, we were wrong after it released the Apple watch back in 2015. The Apple watch has taken the watch industry by storm and has in some ways, redefined the function of a watch.

The digital transformation we see in the industry; radical changes in watch designs and functionality is no surprise given the increasing needs of our daily lives. In the past year or so, we have seen many brands succumb to the popularity of smartwatches and jumping onto the bandwagon to take advantage of it. A few examples of such would be the Breitling Exospace and the Tag Heuer Connected timepieces.

However, there are certain brands such as H. Moser & Cie. who choose to defy the trends and stand by their watchmaking values and traditions. In January 2016, the brand caused a quite stir with its Swiss Alp Watch, a fully mechanical Swiss Made model with a contemporary design. This design bears striking resemblance to the Apple Watch and many termed it as the “Anti-Apple” watch given the similarities shared between them and clearly an attempt to mock Apple.

The message given by H. Moser & Cie. was clear: “We’re not straying; we’re remaining true to the tradition of mechanical watchmaking; that’s what we do, and we do it well”. The message given by the brand was widely appreciated, and the 50 Swiss Alp Watches were immediately popular with the collector community.

This year, we see a new addition to the Swiss Alp watch collection in a model with a midnight blue fume dial, the Swiss Alp Watch S. Although the S model does not allow one to make phone calls or catch Pokemon, it is an instrument that allows one to measure time instead of consuming it in a quick fashion. The Swiss Alp Watch S from H. Moser & Cie. comes in a solid 18 carat white gold casing that measures at 38.2 x 44.0 mm. The timepiece comes in a rectangular casing with soft, rounded corners and is topped by sapphire crystal, similar to the Apple watch. One of the features of the casing that literally sticks out is the crown; a screw-in crown adorned with an “M”. The midnight blue fume dial is lovely, subtle and elegant-looking as a whole. The finishing of the leaf-shaped hands and markers is top-notch and complements perfectly with the midnight blue accents of the dial. The dial also has a small second offset located at the 6 o’clock position of the dial.

The Swiss Alp Watch S is powered by the hand-wound HMC 324 calibre which runs at a frequency rate of 18,000 vph comprising a total of 27 jewels. This movement has an impressive power reserve of 4 days at the minimum, much more than what a fully-charged Apple watch can offer. The HMC 324 movement features an interchangeable Moser escapement and the original Straumann Hairspring with stabilized Breguet overcoil. The hand-wound HMC 324 calibre operates at a frequency rate of 18,000 vph comprising a total of 27 jewels.

The movement and its components are hand-finished and decorated according to the highest standards of traditional watchmaking. The see-through sapphire case-back allows for a clear view of the beautiful finishing on the movement. 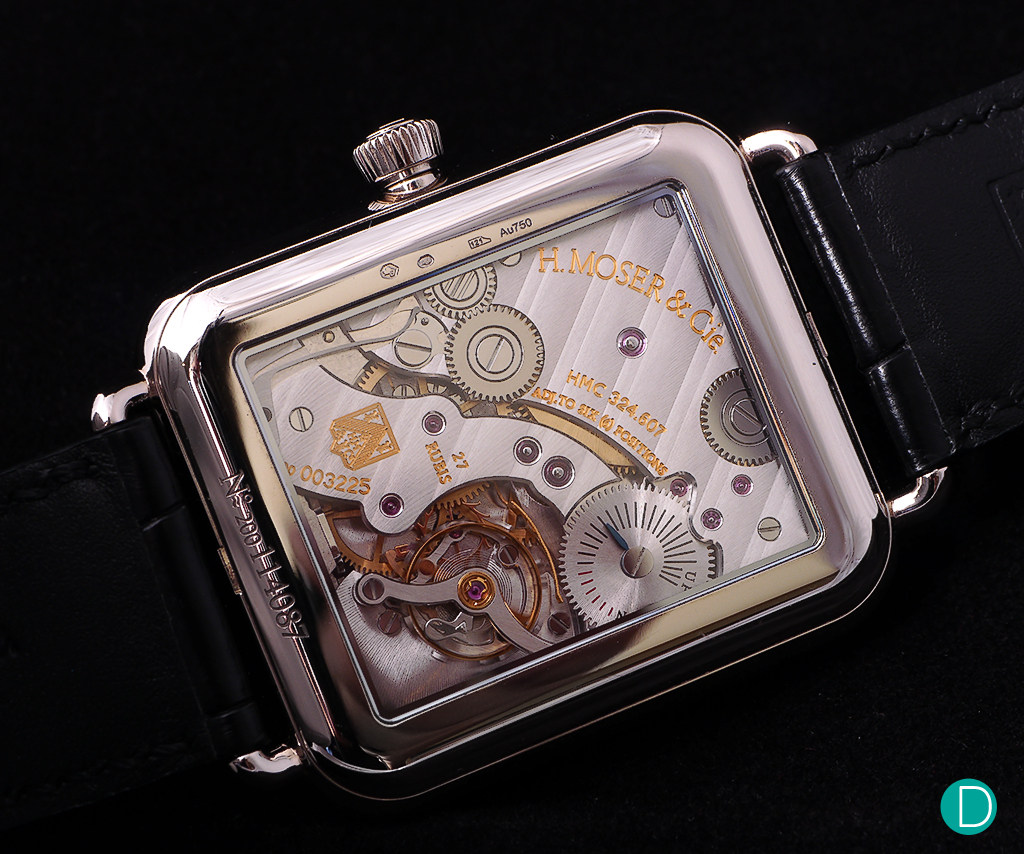 The see-through sapphire case-back allows one to enjoy the movement in full view.

The Swiss Alp Watch S does not offer a huge difference when compared to its predecessor. The clear difference to us is the dial colour, watch strap and the fact that this is not a limited edition release.

Moser has done a good job in its attempt to mock at the Apple Watch with the watch bearing striking resemblance in terms of its profile. However, there is no comparing between the two, the Swiss Alp Watch S is in a different league with the use of high quality materials and great workmanship.

Retailing at a price of SGD$ 38,640 inclusive of GST, we think the price is pretty steep considering there is not many differentiating points the watch offers except for the fact that it looks like the Apple watch. Nonetheless, it is still a quality timepiece and deserves a good look especially for those who dislike the smartwatch. Screw-in crown adorned with an “M”

Moser teeth for all wheels and pinions

Movement and components hand-finished and decorated

Power reserve indicator on movement side