We have been hoping this valuation of a very rare vintage Patek Philippe complicated pocket watch from the US Antiques Roadshow would be re-uploaded to their website.  This is one of those finds where the timepiece has literally been sitting locked away in perfect condition.  Yes, we know the clip is from 2004 but still goes to show a timepiece of importance can be unearthed anytime and place.

The pocket watch manufactured by Patek Philippe in 1914 featured a perpetual calendar, splits seconds chronograph and minute repeater housed in an engine turned 18ct gold case.  The man who brought in the pocket watch was the great-grandson of the original owner. 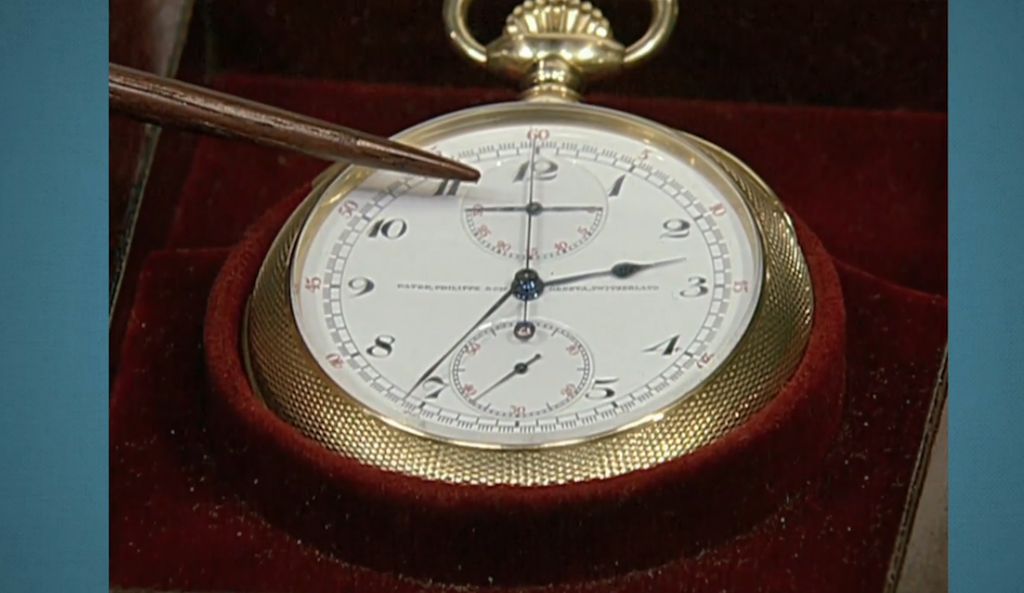 Reverse side of the timepiece showing the perpetual calendar and moonphase.  The name George Thompson and his company name are printed below the moonphase. The reverse side of the Patek Philippe George Thompson Pocket Watch

The slide of the minute repeater The Antiques Roadshow appraiser asked the gentleman if he ever had the watch appraised previously and it highlights the importance of seeking a second opinion.

The pocket watch (Supercomplication No. 174 480) resides at the Patek Philippe Museum in Geneva.

Information from the Patek Philippe website on the man who commissioned the timepiece and details of the watch:

The story of the rediscovery of George Thompson’s unique, grand complication timepiece is almost as extraordinary as the watch itself. Thompson, who was born in the English county of Devon in 1840, began his working life as a financier but the bank he worked for collapsed during the 1870s, prompting him to move to America. Changing to a career in journalism, he took a position with the St. Paul Pioneer Press and Dispatch in St. Paul, Minnesota, eventually becoming its editor and owner.

Thompson’s success in business enabled him to commission Patek Philippe to make this exceptional, double-dialled watch. The front features a conventional time display with a split seconds chronograph, a 30-minute register and constant subsidiary seconds, while the reverse incorporates the perpetual calendar dials showing the day, month, date and phases of the moon,  each one exquisitely decorated in red enamel for maximum clarity. The watch also includes a minute repeater mechanism and, unusually, both the front and back bezels of its massive 54mm diameter case are engine-turned.

The whereabouts of this historically important watch remained unknown for decades until it was brought to a specialist on the American version of the Antiques Roadshow for appraisal in June 2004 by Thompson’s great grandson, who had inherited it. Previously unaware of its significance, the great- grandson subsequently consigned it to a Sotheby’s auction in May 2006, where it trebled expectations to fetch CHF1.86 million. It was sold with its original box, which still contained two spare crystals and two spare springs.

We have put the link to the video below.

It is still possible that many rare pieces are still lying in safe keeping, with their owners not knowing the significance of what they have in their safe or drawer.  We love stories like this and seeing the reaction of the person when they found out the value of their timepiece.