The 1957 Trilogy Collection was presented by Omega on 16 Sept at the Tourbillon Boutique in Baden-Baden. Omega shared with a small group of collectors and enthusiasts the limited collection, accompanied by the 1957’s originally released timepieces. This was the perfect opportunity to compare, side by side, the initially released wristwatches with the anniversary edition. With this occasion, we caught some wrist time with the Omega Speedmaster “Speedy Tuesday”.

At the end of the fifties, in the horological world was missing a wristwatch that can fulfil several requirements. NASA was looking for a watch to go to space, and eventually land on the moon. The watch should be a robust and water-proof chronograph with good legibility and great precision. Omega’s answer was the Speedmaster. The wristwatch was part of the Seamaster Collection. The reference 2915, the “Broad Arrow”, was the first to have a tachymeter scale on the bezel as opposed to printed on the dial. The Speedmaster was the first watch with the now standard layout of the three counters. But the most known achievement of the Omega with the Speedmaster was to come later. After a series of tests that ruled out other watches, the Speedmaster became the choice of NASA for use in space missions. The apogee was attained in 1969 – the first watch to be worn on the moon on the wrist of Apollo 11 astronaut Buzz Aldrin.

Although Apollo 11 commander Neil Armstrong was first to set foot on the Moon, he left his 105.012 Speedmaster inside the Lunar Module as a backup, because the LM’s electronic timer had malfunctioned. Buzz Aldrin decided to wear his and so his Speedmaster became the first watch to be worn on the Moon. Later, he wrote of his decision: “It was optional to wear while we were walking on the surface of the Moon … few things are less necessary when walking around on the Moon than knowing what time it is in Houston, Texas. Nonetheless, being a watch guy, I decided to strap the Speedmaster onto my right wrist around the outside of my bulky spacesuit.” Astronaut Buzz Aldrin walks on the surface of the moon near the leg of the lunar module Eagle during the Apollo 11 mission. Mission commander Neil Armstrong took this photograph with a 70mm lunar surface camera. While astronauts Armstrong and Aldrin explored the Sea of Tranquility region of the moon, astronaut Michael Collins remained with the command and service modules in lunar orbit.
Image Credit: NASA

The Singapore leg of this exhibition was held at the end of June, and we covered the event here.

The 2017 Omega Speedmaster 60th Anniversary Limited Edition, announced at Baselworld, is part of Omega “Masters” Trilogy celebrating the anniversaries of the other two legendary “Masters” launched in 1957 – the Seamaster and the Railmaster.

A Trilogy of Masters: the Omega 1957 Trilogy The 2017 Omega 1957 Trilogy Anniversary timepieces together with 1957 released “Masters”, courtesy of the Omega Museum. Omega managed to keep the Trilogy watches as a close as possible to the original design. The changes are only improvements for wearability and reliability. At a first glance, it is imposible to say which one is the new or the old model.

We reviewed the Omega 1957 Limited Edition Trilogy that was released this year at Baselworld. We couldn’t miss the opportunity to revisit the collection.

The Omega 1957 Trilogy is composed of Seamaster, Railmaster and Speedmaster.  The watches are a homage to the 1957’s timepieces. For this special release, the need to be authentic demanded that Omega took additional care in the design and a combination of original drawings and digital scans of the ones from the Omega Museum were used. 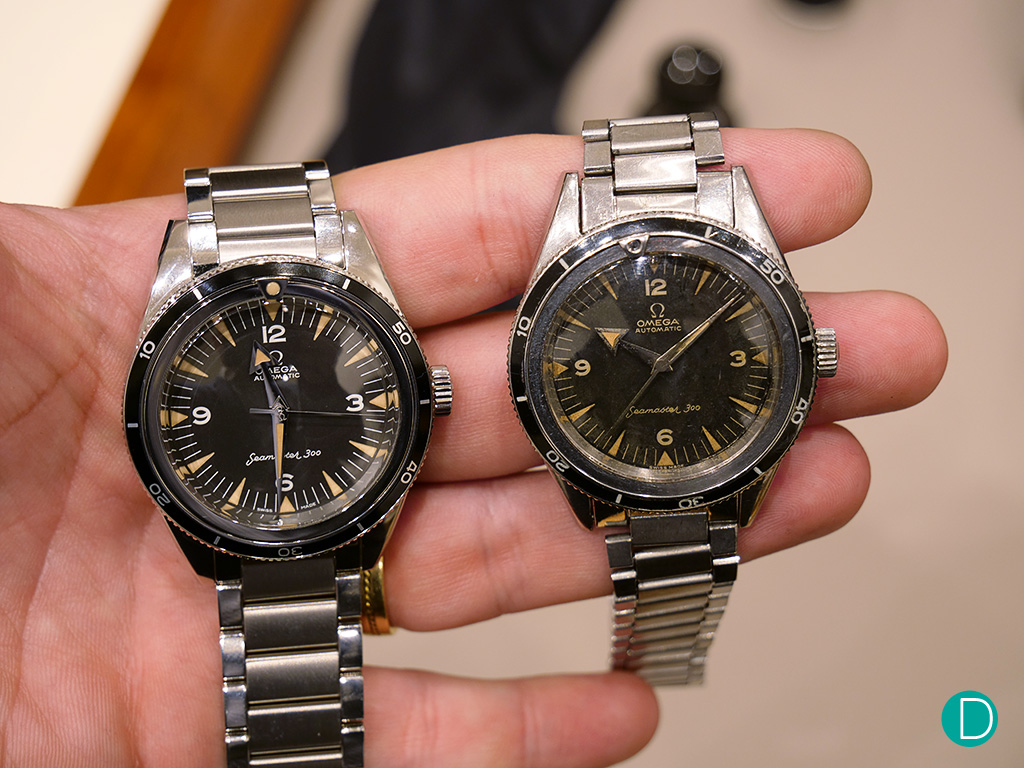 At the event, Omega officialities brought the museum’s timepieces: a Seamaster 300 Ref. CK2913, a Railmaster Ref. CK2914 and a Speedmaster CK2915. All three vintage watches could be compared with the modern counterparts side by side. This lifetime opportunity revealed the resemblance of the old and new. The collectors were thrilled to notice similarities and differences and also to receive explanations about design and execution. The Omega 1957 Trilogy set was released in a 557-limited series and comes in beautiful Swiss oak wood box. The Trilogy’swatches can be acquired separately as part of a wider limited series of 3000 pieces. Omega will produce a total of 3557 units from each model. At the event, we had the occasion to have a look at another limited edition Speedmaster. The “Speedy Tuesday” was the Omega thank for the online media. The release is attributed to the #speedytuesday Instagram hashtag. The first use was recorded on May 12, 2012, by Robert-Jan Broer of Fratello Watches. He created it to use it as a working title for posting pictures of the Omega Speedmaster on the online media. This unusual release was a collaboration of Omega and Fratello Watches with a design which is inspired by Omega’s Speedmaster “Alaska Project III” model. “Alaska” was created for NASA in 1978. At the time, NASA had required that the watch had to be both anti-reflective and easy-to-read, or in other words – suitable for use in space. The “Speedy Tuesday” has stayed true to these qualities with a brushed matte-finish stainless steel case and large radial numerals on the sub-dials. The “Speedy Tuesday” stays true to the “Alaska Project III” model, created in 1978 with a brushed matte-finish stainless steel case and large radial numerals on the sub-dials.

The event was organised by a collaboration of the Swatch Group  Omega Watches and Fratello Watches.

Note: All the images are taken under difficult lighting conditions and it was difficult to re-balance the colour later.