IWC extends the Top Gun collection in the Pilot’s Watches range with the the Pilot’s Watch Chronograph TOP GUN Edition “SFTI”. The The new model takes inspiration from the “Strike Fighter Tactics Instructor” watch, which was created in 2018 in honor of the US Naval Aviation Community and is available only for TOPGUN graduates. This new release is the commercial model. The case is a combination of a black ceramic case with a Ceratanium® case back and pushers, the sporty chronograph boasts a tactical, matte black design code.

The original TOPGUN graduate watch was first created by IWC in collaboration with the instructors at the Naval Air Station Leemore in California. The watch featured a black ceramic case, and the iconic TOPGUN patch on the dial, and available exclusively for the graduates of the Navy Fighter Weapons School.

While we did get to examine the TOPGUN only SFTI model, we were not allowed to take photographs. This new release, shown here is the commercial release, and available as a limited edition of 1500 pieces, and takes its inspiration from the “Strike Fighter Tactics Instructor“ watch. And it built in the tradition of IWC TOP Gun watches – robust materials to withstand the high strain that pilots experience in the cockpit of the supersonic jets like the F/A-18 Super Hornet.

The case is in the classical IWC Flieger shape, measures 44mm in diameter and in black zirconium oxide ceramic. The material has a Vickers rating second only to that of diamond, and is extremely scratch resistant. The high-tech ceramic used in watch cases is characterized by extremely pure raw materials and sophisticated production processes. The source materials are polycrystalline powders, which are mixed with several auxiliary materials to a homogenous mass, shaped and finally sintered at high temperatures in an oven. Because of its lightness, hardness and scratch-resistance, the material is ideally suited for everyday use in the restricted space of a jet cockpit. The matte black color ensures that pilots are not distracted by the watch reflecting sunlight. Titanium and ceramic are also highly resistant to corrosion, making them ideal for long-lasting missions on an aircraft carrier in the humid, salty sea air. The case back and chronograph are made of Ceratanium – a new material as light and durable as titanium but with the same scratch resistance as ceramic. The combination of ceramid and Ceratanium gives the watch a very stealthy and anti-reflective matte black finish. The case is rather thick, but the generous diameter makes it look very proportional, and the stepped bezel and sleek curves of the case extending to become the lugs make it a good looker.

Ceratanium®. This ground-breaking new material is based on a special titanium alloy. After the components of the case are milled, turned and drilled, they are heated in an oven. During this furnace process, oxygen diffuses
into the material, and a phase transition occurs, with the surface then assuming properties which are similar to those of ceramic. Ceratanium® is both light and robust like titanium and also hard and scratch-resistant like ceramic. Unlike more conventional coatings, the surface is inseparably bonded with the material and cannot flake off if the watch is knocked against another object. Thanks to this new material, all components of the watch case can be manufactured in a durable jet-black finish for the first time. The dial is typical of the IWC Fligerchronographs. Black and very instrument like in the look and feel. The markers are very arabic numerals with thick lines for minutes and a big triangle at 12 flanked by two dots. The hands are black, but infilled with a thick coating of luminescence, as are the hour and minute markers making the dial very clear and legible, even in the dark. A pre-requisite for the flight deck, especially when when operating under pressure in missions. As a nod to the TOPGUN status, the small second hand and the counterweight on the chronograph second hand takes the form of a jet in red. Nice small touch which will endear the watch to collectors and TOPGUN enthusiasts alike. The Ceratanium case back covers the entire back, and is engraved with the standard IWC branding with additional TOP GUN markings. The numbered series is shown as an engraving as well. The movement is the IWC manufactured Caliber 69380. This movement is not new, and is already tried and tested in numerous IWC models from the Ingenieur Chronograph, the various Spitfire and TOP Gun Chronograph models. The chronograph is a classic column wheel design, and provides stopwatch measurement times of up to 12 hours. The movement provides a day and date function.

In operation, it is smooth and easy to activate, stop and reset, and in our limited testing operate perfectly. We did not have the opportunity to open the case to examine the movement, and thus unable to comment on the finishing. Though as we are relatively familiar with IWC movement finishing standards, will assume that this movement is finished adequately for the engineering functionality it needs and will not have embellishments for it to win any haute horlogerie beauty contests. But such decorations are not the purpose of the movement, but rather its missive is to provide reliable, and accurate timekeeping and stopwatch functionalities, and based on this design criteria, we think the Caliber 69380 is fit for purpose and does an admirable job.

Pilot watches is a huge genre and here we have competition from Bell & Ross, Breitling, Casio, Hanhart, , Patek Philippe, Sinn and Zenith. None of the competition have any official military pilot affiliation, so on that basis alone the IWC Ref. IW389104 may be considered unique. Throw in a limited edition of 1500 numbered examples, and the IWC branding, and we think its a winner. The IWC is priced at a rather modest S$ 14,100 inclusive of GST, though in this tool watch territory, it is not inexpensive. Not all are chronographs that the IWC is. And none have direct military affiliations. Listed here in alphabetical order:

Bell & Ross BR V2-94 Bellytanker Bronze is less expensive, but is not fitted with an in-house column wheel movement. But it does have a bronze case and a classical two counter chronograph without date nor day of week indication. The movement is calibre BR-CAL.301; an automatic modular chronograph that uses a base Sellita or ETA 2824, 2836 movement. The watch is limited to 999 pieces and is priced at S$7,800.

Breitling Navitimer Ref. 806 1959 Re-Edition provides a flight watch alternative which is classical. The Ref. 806is a faithful reproduction to the original Brietling Navitimer and warrants a consideration just based on its historical roots and the rather nice Breitling B09, a derivative from the famous B01, movement ticking within. The Navitimer Ref. 806 1959 Re-Edition is available on a black leather strap and as a limited-edition of 1959 pieces, all individually numbered and engraved on the caseback. The watch is priced at S$11,750.

Casio G-SHOCK Gravitymaster GR-B200 is typical Casio G-SHOCK. Carbon Core Guard construction, carbon-infused resin bezels and resin bands, quartz movement, highly shock resistant design. It is a kind of a smart watch, packed with a number of technology features, the GR-B200 offers tactical functions for all level of aviation enthusiasts. Not limited, and retailing for S$479.

Hanhart Primus Nautic Pilot Bronze as the name implies is cased in a bronze shell, and equipped with the Sellita SW510, a Valjoux 7750 clone. It displays a date, but no day of week. The watch is a limited edition of 300 pieces and will retail for EUR 2.950.

Sinn 365 SA Pilot III is anothe classic choice for pilot watches. The 365 has a smaller case diameter as opposed to IWC’s modern Pilot chronographs. Sized at 38.5mm, the satinized stainless steel trim case width only gives way to a disproportionately thick 15 mm case height, largely due to the “gigantic” SW500 that runs the watch. The dial markings are remarkably similar to what IWC has chosen, though our review sample has a silver dial with black markings, a black dial with white markings is also available The Sinn is also equipped with day and date displays. Priced at SGD 3,850. Non limited edition.

We liked the IWC Pilot’s Watch Chronograph TOP GUN Edition “SFTI” Ref. IW389104 for what it is. A well designed, well made pilot chronograph which is fully functional, and yet quite a handsome looking fellow. The affliation with the US Navy Fighter Weapons School TOPGUN is an added bonus, not only for fighter aircraft enthusiasts and flight watch collectors, but also to the more generic watch collector. 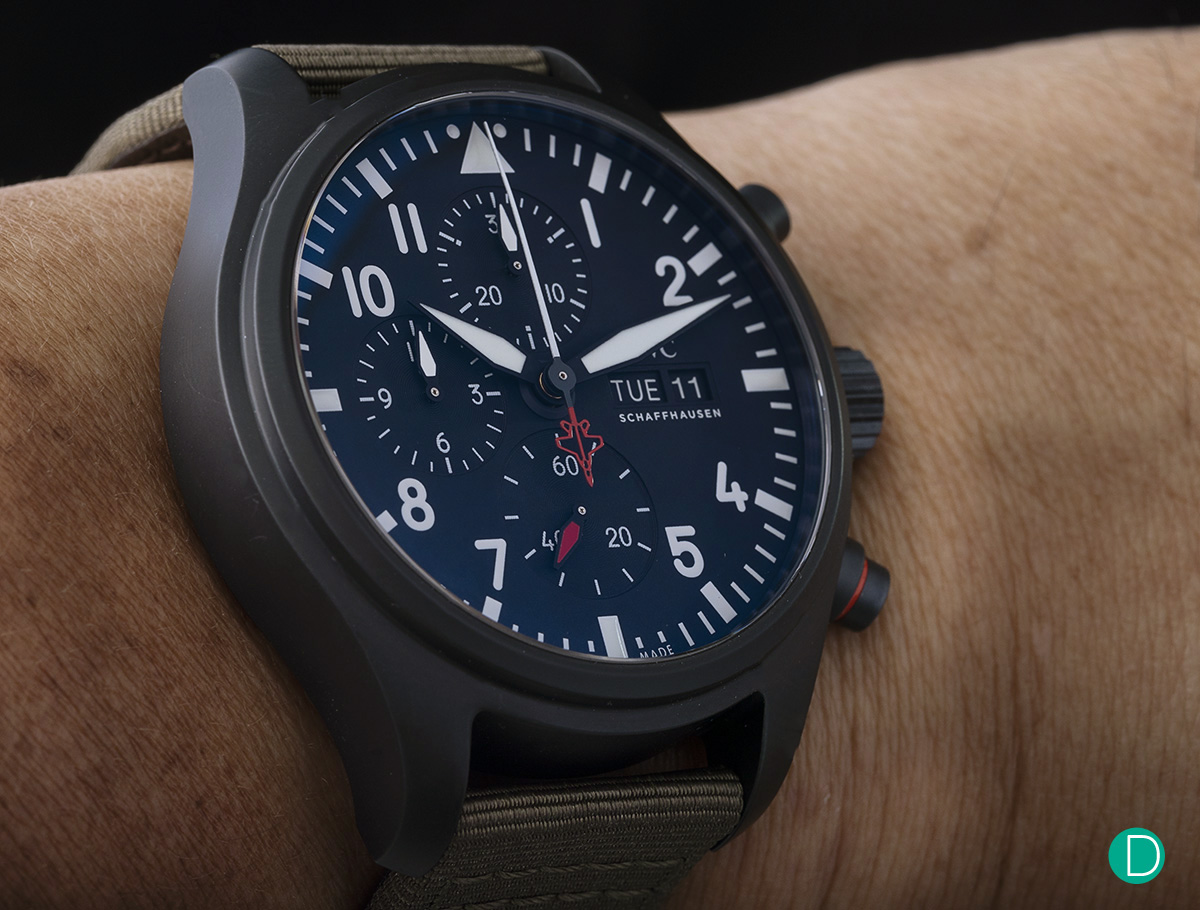 We think it looks very good, much the part of a top class flight watch. The small elements like the fighter aircraft chronograph seconds counterweight is a nice touch. The operations is nice and smooth, and the NATO-styled fabric strap completes the visual image very well. In a military career spanning over 25 years, now-retired Captain of the US Navy and IWC friend of the brand,
Jim DiMatteo*, has amassed over 5,000 hours in five different fighter aircraft. In this interview, DiMatteo talks
about the legendary Navy Fighter Weapons School TOPGUN, flying supersonic jets, fear in the cockpit, the
importance of time for a fighter jet pilot, and life lessons learned as a Naval Aviator.