A remarkable story of how a new watchmaking adventure takes to the skies with the Vintage BR Racing Bird series, a limited edition of 999 pieces.

The two new watches from the Vintage BR Racing Bird series are inspired by the BR-Bird plane, an aircraft unveiled by the Bell & Ross design studio.

The Bell & Ross adventure started in a cockpit with watch designs that were directly inspired by flight instruments and the golden age of aviation. This journey continues to this day on the wrist, naturally, but now it also returns to the skies on the wings of the BR-Bird. While the on-board instruments set the standard for legibility, precision and reliability, the entire history of aviation serves as a powerful inspiration for Bell & Ross. This area of research has helped the brand create incredible machines rooted in the quest for speed and performance. 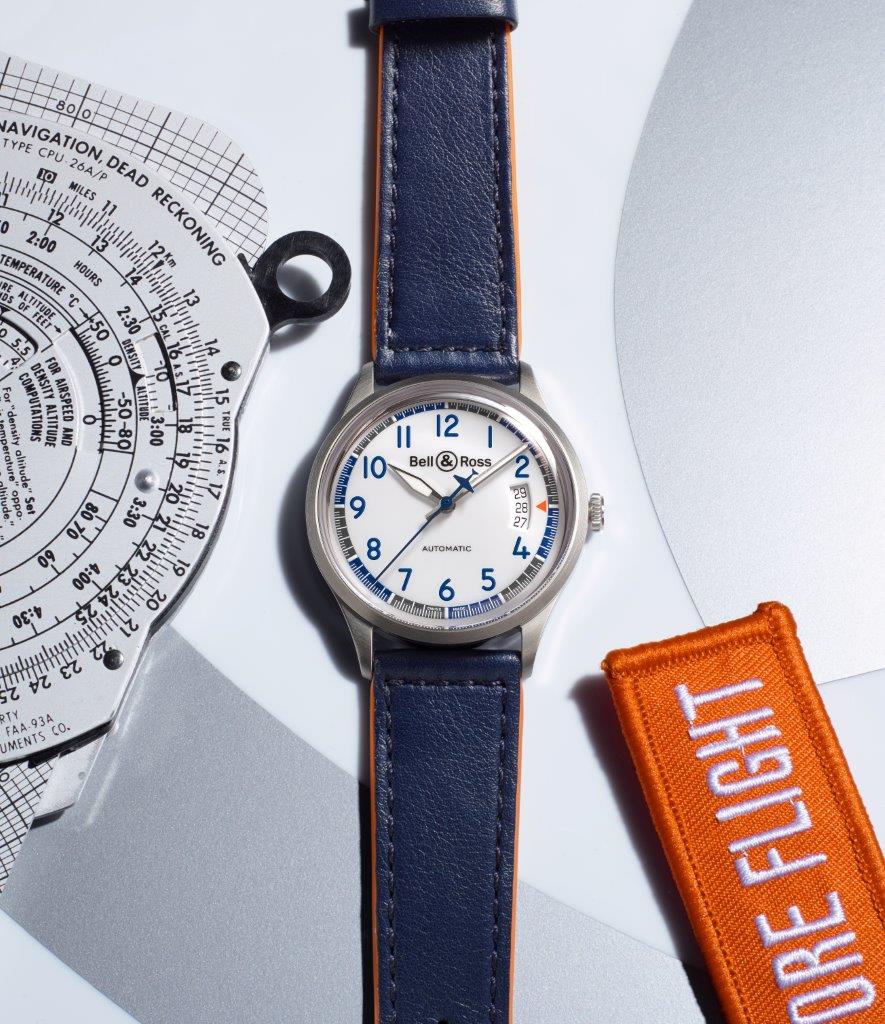 In 2014, Bell & Ross expressed its inventiveness through the B-Rocket, a motorcycle with a name paying tribute to the prototypes of the 1950s designed to break the most staggering land speed records on two or four wheels.

This same quest for the ultimate aerodynamics and extreme sportsmanship saw the 2016 launch of the AeroGT, a supercar with the sci-fi silhouette of the Rafale.

In 2017, it was time for a new and exceptional racing car to take to the stage. With a tapered shape reminiscent of the drop tanks used by the fighter jets of the 1940s and four narrow wheels, the Bellytanker returned once more to the world of wheeled machines fighting to break land speed records at the Great Salt Lake in Utah.

With machinery both technically and stylistically inspired by the world of aeronautics, bringing together pioneers both past and future, the B-Rocket, AeroGT and Bellytanker have been the source of inspiration of exceptional limited edition watches. Today, it is the BR-Bird’s turn to take to the skies for a new adventure in aviation and watchmaking. Bell & Ross has designed its own plane

After designing racing cars inspired by aeronautical shapes, Bell & Ross has now designed a plane of its own. It should come as no surprise that it is a high-speed plane capable of competing in the Reno Air Races in record-breaking style.

Every year in Reno, Nevada, at the edge of the American desert, the scene is set for the most extreme speed competition in the aviation world. Created in 1924, this event brings together aircrafts flying at full speed and at very low altitude, on a closed circuit delineated by 10-metre-high pylons.

To have a chance of prevailing in this competition, considered to be the most beautiful air racecourse in the world and of achieving phenomenal public success, the pilots need to be as daring as they are dexterous. And they need a machine with exceptional power, aero dynamism and maneuverability.

The BR-Bird, brainchild of Bruno Belamich, Bell & Ross’s co-founder and creative director, fits the bill. An ultramodern single-seat, propeller-engine aircraft, built entirely of high-tech material (graphite, fiberglass, titanium and aluminum alloy), the BR-Bird is powered by a V12 Rolls Royce Falcon developed on a Merlin base (names that have legendary status in aviation, particularly thanks to the legendary English Spitfire).

While its cockpit is placed as far back as possible, evoking the high speed of dragsters, its short but broad wings, placed very far forward, hark back to the Comet DH.88, Hughes H-1 and the Bugatti-DeMonge 100P of the 1930s, but also the famed P51 Mustang of the 1940s. Its Y-shaped empennage ensures maneuverability, while making it immediately recognizable.

With its meticulously designed shape and its powerful aesthetic, the BR-Bird belongs to the world of speed, forging a bond between aviation history and future technology. 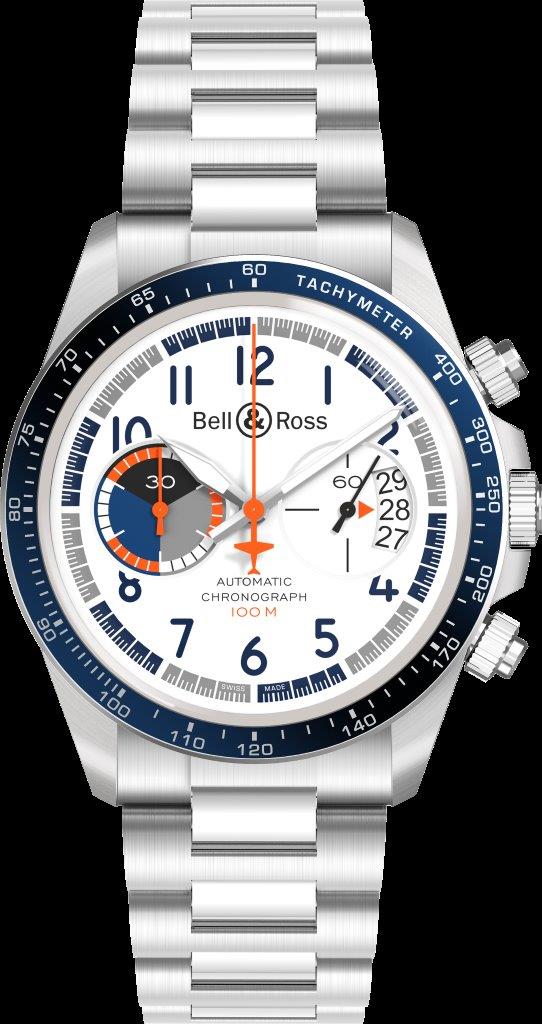 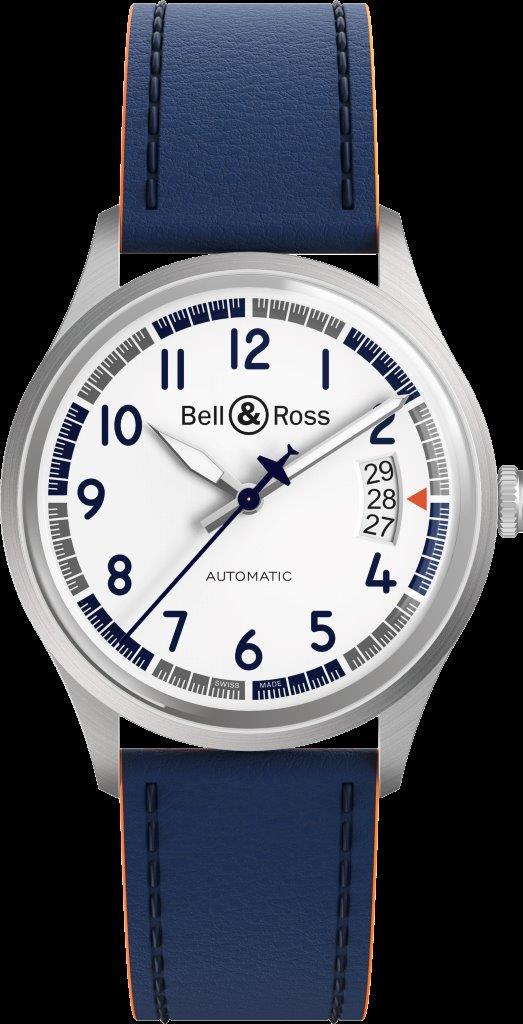 This identity of speed and performance is evident in the design of the three-hand and chronograph Vintage BR Racing Bird watches. These timepieces share their aesthetic choices with the racing aircraft designed by the Bell & Ross studio, particularly the color code: The dial is white, like the fuselage of the plane. The numerals, bezel, chronograph counter and strap are blue, like the empennage and decorative elements tracing the aerodynamic lines of the BR-Bird. The central second hand, details on the dial and lining of the leather strap are orange, like the color highlighting the most important information on the flight instruments. The timer is grey, reminiscent of the chequered flag used in speed competitions, like the Bell & Ross logo on the wings and flanks of the aircraft.

On the dial, the numerals use the same typography as the on-board counters, and the date window shows three numerals –a direct reference to flight instrumentation. The final touch is the silhouette of the aircraft on the case back and at the base of the second hand (on the three-hand version) and the second timer (on the chronograph version). With a 38.5 mm steel case for the BRV1-92 and a 41 mm for the BRV2-94, both versions are powered by a self-winding mechanical movement.