Birthed in the throes of the Great Depression, Jaeger-LeCoultre celebrated the 85th birthday of the heralded Reverso with a brand new SIHH 2016 collection. Here at the crossroads of yet another global recession, the Reverso brings much needed salve to a weary world as it once did: a follow up edition of the Reverso à Eclipse with a enamelled painting of Master Vincent Van Gogh.

Birth of an Icon: Jaeger-LeCoultre Reverso

A symbol of a bygone era, the Jaeger-LeCoultre Reverso is a gentleman’s expression with art deco aesthetics but more importantly, I consider it the world’s first sports luxury watch. Designed for British colonial officers who frequently cracked their watches during spirited games of polo in India, the Jaeger-LeCoultre Reverso was an elegant solution to the challenge posed by Cesar de Trey. In terms of watchmaking competence, the idea of a reversible case isn’t mechanically marvellous (like say, the tourbillon, of which they are masters of as well) but it was technically brilliant and one which joined the names of Jacques-David LeCoultre and Jaeger S.A. into an increasingly close working relationship to which there would be inevitable and eventual merger. The other point of evidence to the Reverso’s place in the annals of horology: By 1932, a scant year after its birth, other watchmakers would soon attempt to ‘one up’ the venerable inventive slide-flipping timepiece in the form of the Cartier Tank Basculante and the divisive (and derivative) albeit collectible (at least as far as eBay vintage watches go) Hamilton Otis.

A warrior and a gentleman’s watch The 2016 Reverso Tribute Calendar is representative of the Manufacture’s expertise. On one side it displays a traditional function, a complete calendar, and on the other the exclusive Reverso Duo function with an elegantly appointed black anthracite Clous de Paris hobnail guilloché with sophisticated gilt hour-markers.

The Reverso is uniquely positioned like no other timepiece today. As the world’s first sports watch, the Reverso expresses a metaphorical duality beyond its physical attributes (case flipping to present the watch face-down). In order to be considered complete, a gentleman needs to master both his academic inclinations as well as his martial abilities; in that sense, swinging a polo club in place of an officer’s sabre upon a horse is a no less martial activity as evidenced by Alfred’s offer to Bruce Wayne in Batman Begins to pick up polo as a means of explaining bruises from his alter ego’s crime fighting activities.

Next, it’s the literal expression of ‘legacy’ as demonstrated with the “blank canvas” the Reverso’s caseback presents. A cottage industry soon arose for jewellers and artisans to engrave family crests and monograms upon the caseback, forever commemorating both a man’s place and position in society as well as his legacy upon his death – in essence, the ultimate heirloom.

While some consider the Reverso to have transcended its position from sports watch to dress watch, the truth is the Jaeger-LeCoultre Reverso is robust enough to follow some on adventures in the arctic and a spectacularly well-appointed timepiece in terms of design and proportion. In essence, it is the embodiment of everything a true gentleman aspires to be, a man simultaneously civil yet defensively aggressive when called upon in defence of life and family.

The Reverso, a canvas for the Grand Maison

In the 85 years since its conception, the Reverso has become both a potent symbol for Jaeger-LeCoultre and an amazing canvas for technical expression beyond the shields and initials. Since the early 90s, Jaeger-LeCoultre has used one of the world’s most distinctive shapes to express all manner of mechanical genius- from perpetual calendars to the awe-inducing gyrotourbillon but the real challenge came not from utilising the Reverso’s rectangular dimensions but in exploiting the availability of faces on the reverse side and even the carrier/cradle of the watch. By 1994, the Reverso Duoface powered by the calibre 854, became the sort of timepiece which proved why Jaeger-LeCoultre was truly the Grand Maison; the Duoface was the kind of watch which presented whatever mood or inclination the owner chose to present. That said, the eventual Triptyque which came into existence 12 years later would take the idea of the Reverso to its logical climax – three faces of the the Jaeger-LeCoultre Reverso Grande Complication a Triptyque from watch to cradle were all utilised and driven by the same mechanical calibre, ending all doubt to the primacy of innovation which has driven Jaeger-LeCoultre since its birth from a squabble between two rival watchmakers looking to prove who was the better.

Following the muse of Dutch jewellery boutique- Gassan, the Van Gogh museum and Jaeger LeCoultre worked together to debut the second series of the Reverso à Eclipse. Dubbed “Reverso in Tribute to Vincent Van Gogh”, the latest Jaeger LeCoultre Reverso features the famed Selfportrait (pun intended) of the namesake painter on the dial; the first of the series featuring the iconic Sunflowers. Imagine wearing one of the art world’s most celebrated paintings (and part of the permanent collection at the Amsterdam museum) on your wrist. 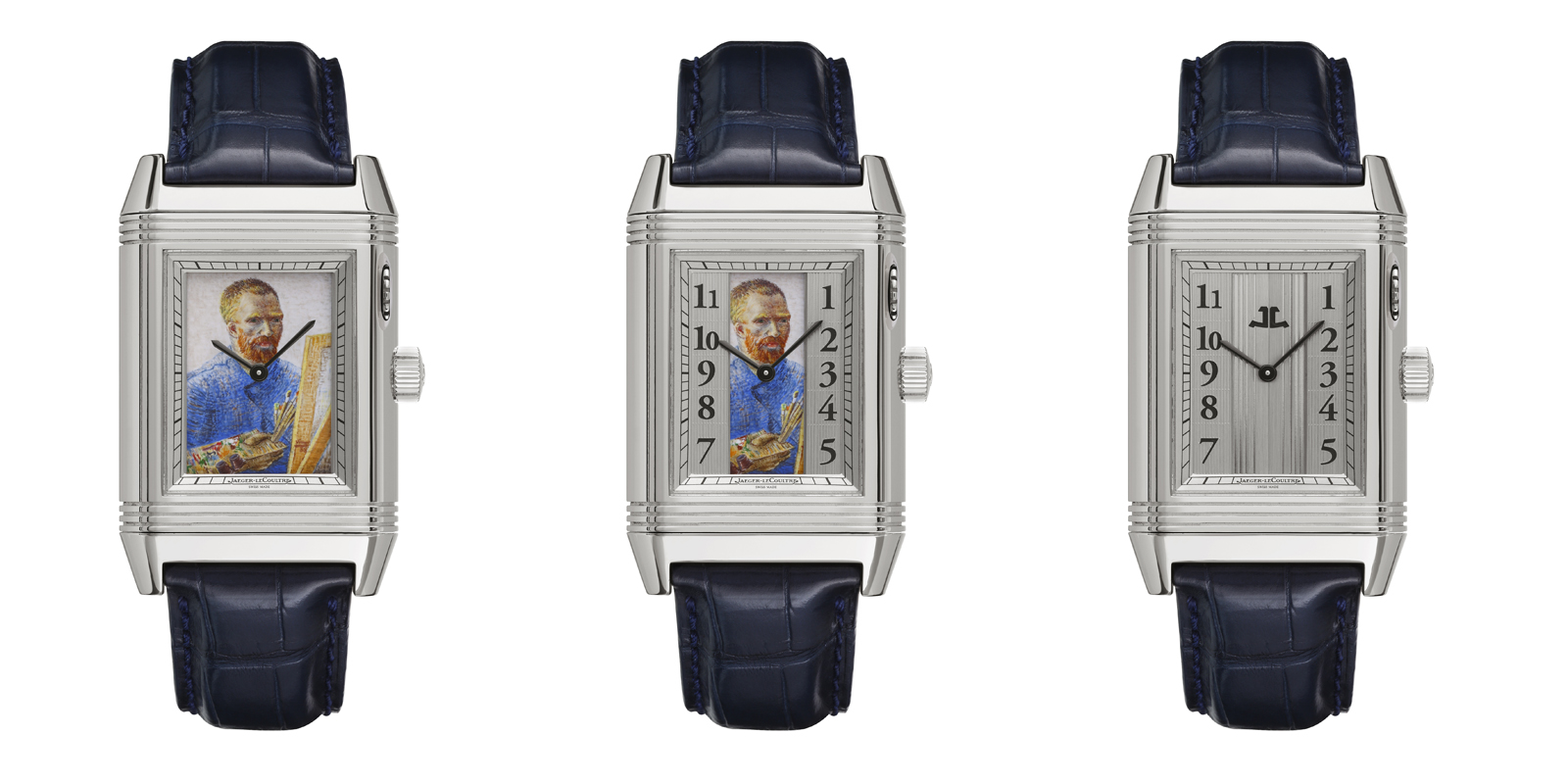 A discipline that is scarcely taught these days, miniature enamel painting is one of these singular skills. Jaeger-LeCoultre delights in seeking out the most authentic, high-quality enamels which, given the rarity of the craft, are becoming increasingly hard to find

While it’s quite self evident as to the nomenclature of Van Gogh’s lauded self portrait, the Reverso à Eclipse is so named for the “shutters” which eclipse the dial painting and then open to reveal the miniature enamel recreation of Van Gogh’s most desired work.

Beauteous both outside and in, the newest Reverso à Eclipse is powered by the JLC 849 hand wound manufacture calibre. The thinnest mechanical movement in Jaeger LeCoultre’s repertoire, the round 849 is a robust movement also used in the maison’s Master Ultra Thin line while the 849RSQ is used in the Grande Reverso Ultra Thin SQ; thus this unique reversible watch undeniably combines both the Manufacture’s virtuosity in fine art and technical traditions. Vincent van Gogh was a Dutch post-impressionist painter with an impressive œuvre. He painted over 2100 artworks (paintings, drawings and works on paper) with amongst others also many self-portraits.

Since 1931, no other watch has conjured the kind of emotional resonance as the Reverso. An unexpected treasure and a surprise to behold at every (literal) turn, the iconic Reverso has served as Jaeger-LeCoultre’s expression of watchmaking prowess as well as a canvas for heritage crafts such as engraving, gemsetting or enamelling in order to meet the whole spectrum of desires. The 2016 Jaeger-LeCoultre Reverso Classic features subtly reworked lugs which are slimmer and flow more smoothly over the wrist. The circular-grained motif on the carrier or cradle adds a subtle touch of refinement.

It’s an icon which has endured a World War and yet, returned its elegance as an inspirational watch in the ensuing loss of innocence. Its Art Deco inspiration, its geometrical goldenly proportioned (Golden Ratio theory) rectangular case, its gadroons, its straight Arabic numerals, along with its minute track have all withstood the vagaries and whims of passing trends and fashions. Art deco may continue to live on in some renditions of Batman but the stylistic iconography which exemplify the era live on in rarity but purposefully in the Reverso Classic.

Beyond the classic aesthetic codes of the Reverso, the Reverso Classic, available in small, medium and large sizes address the needs and tastes of a discerning audience without compromising the technical demands for the Grand Maison. The small edition is powered by the Calibre 657 with quartz regulator while the medium and large Reverso Classic is driven by the automatic Calibre 965 with 38 hour power reserve. Capitalising on the principle of reversibility, Manufacture Jaeger-LeCoultre has developed and crafted movements capable of driving indications displayed on two separate dials. This invention remains to date entirely exclusive to the Grande Maison and expressively in 2016’s new Reverso Classic Duo.

At the onset, the Reverso Duo was a compelling technical challenge for Manufacture Jaeger-LeCoultre – how does one keep a watch slim while creating a mechanical calibre capable of keeping two independent time zones on back to back opposing faces while retaining independent operation of indicator hands? Well, with apparent ease and to great success; as a result for 2016, the Duo receives a new edition in the form of the Reverso Classic Large Duo.

While it would be hard to top its Reverso Gyrotourbillon cousin in terms of emotive gravitas, the reverse side of the Reverso Classic Duo displays the Jaeger-LeCoultre anchor symbol in prime position on the hobnail dial while the central window reveals the rotating oscillating weight of the automatic Calibre 969.

The new Reverso Tribute collection for 2016 is easily recognisable for its textured fine-grained dials, Dauphine hands, hand-applied hour-markers, as well as the ultimate touch of refinement conveyed through its sunray-finish carrier/cradle.

While the inventiveness of the Maison appears rooted in the grand complications within the Hybris Mechanica collection, the truth is, the spirit of innovation permeates every timepiece birthed from the Le Sentier manufacture from the iconic Reverso to the Duo and here in the Tribute Duo.

Driven by mechanical manually-wound movements, all Reverso Tribute models feature the Duo concept of two independent faces complete with a day/night indicator. A discreet trigger system serving to adjust the second timezone is seamlessly integrated into the case at 6 o’clock so as to preserve its smooth aesthetic lines. 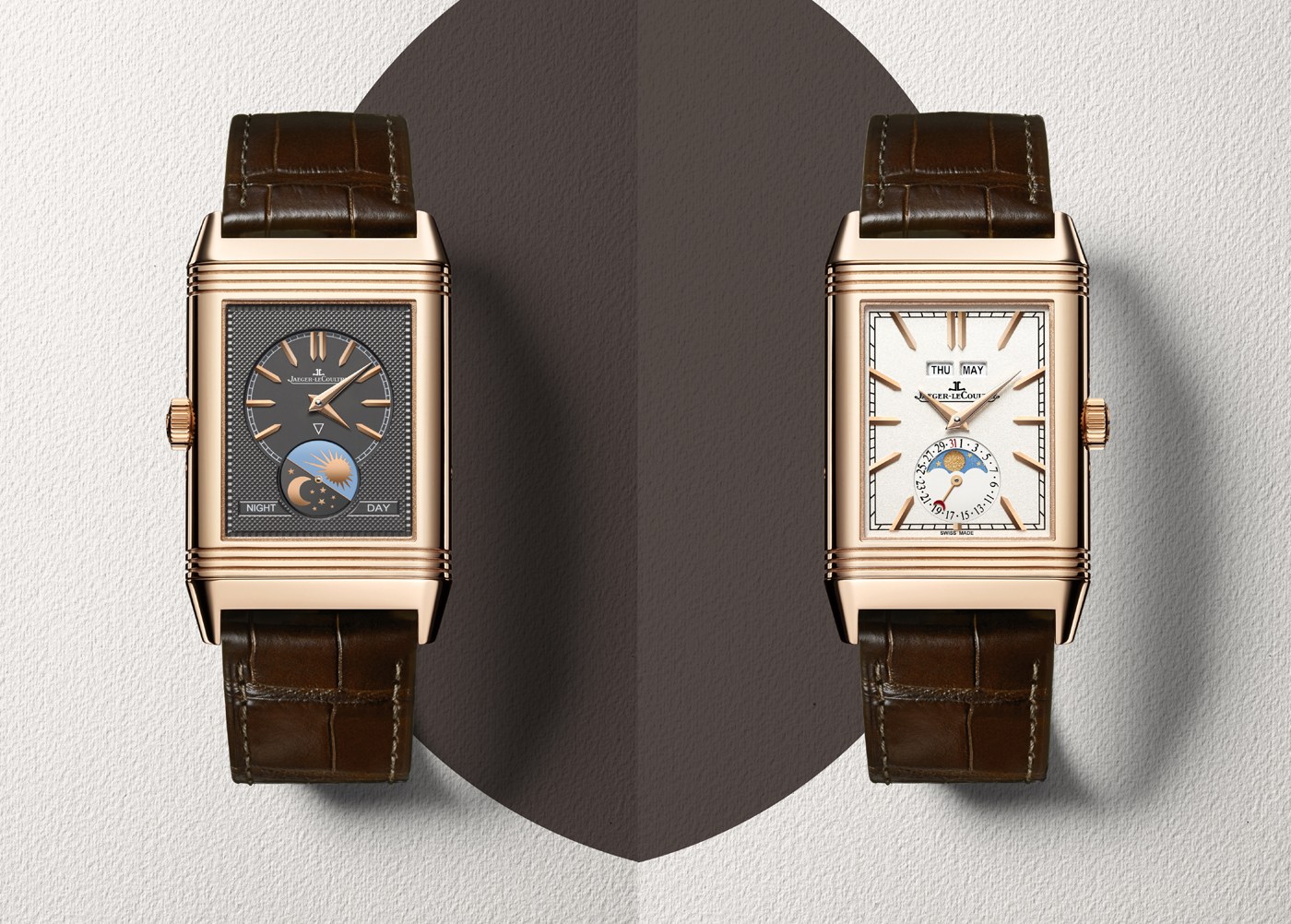 The Reverso Tribute Calendar is driven by the manually-wound Calibre 853 complete calendar movement with 45 hours power reserve. Beautifully proportioned, the hammered moonphase display adds a touch of classic sophistication on the front while the opulently staged day/night indicator echoes in symmetry on the reverse. The Tribute Calendar price SGD$35,500

The Grand Maison’s joie de vivre can be found in the Reverso Tribute Gyrotourbillon, a Grande Complication model celebrating the Reverso’s 85th anniversary in style. It’s a showcase of technical watchmaking skills and Métiers Rares (or rare crafts) demonstrated by Jaeger-LeCoultre since their earliest enamel, engraved watches and table clocks. The new Reverso Tribute Gyrotourbillon is 30% trimmer in terms of both width and thickness, which, when you consider the hemispherical bi-axial orbiting escapement which spins at 6 o’clock, it’s an accomplishment which screams virtuosity. The new 2016 Reverso Tribute Gyrotourbillon is the summation of technical and artisanal excellence for which Jaeger-LeCoultre is renowned the world over.

And then there’s the high horology involved in the creation of an all-new, externally driven, internally developed and produced Gyrotourbillon complication itself. As the result of an external driving mechanism, the flying tourbillon itself appears as if floating in the ether – each carriage trimmed to gossamer proportions and performing an external rotation in a minute while the internal carriage makes a complete turn in 12.6 seconds. The column-like balance spring attached to the Gyrolab balance-wheel is itself a demonstration of maîtrise technique that the filament runs with considerably less air friction thus increasing chronometric precision. Tribute Gyrotourbillon price €$270,000.

Your Own Reverso via Atelier Reverso

Ultimately, for all the Métiers and history, there’s no greater privilege or joy than when it comes to your own bespoke Reverso courtesy of Jaeger-LeCoultre’s Atelier Reverso service. While bespeaking a caseback with treasured engraving of family motto or crest remains a treasured rite of passage, imagining your own Reverso and claiming ownership of every aspect of it is both an unforgettable experience and an act of tremendous legacy. The “Atelier Reverso” service is available to aficionados of the Duo and Duetto offering each watch lover the chance to take part in the adventure of their own bespoke Reverso by choosing the design of the back dial. With areas of absolute freedom to customise your Reverso, Jaeger-LeCoultre artisans in the Vallée de Joux can infuse each timepiece with distinct, individualised iconography and motifs through a range of dials, colours and even gem-set hour markers and dials.

The bespoke Reverso service will start in Spring 2016 at Jaeger-LeCoultre boutiques. A downloadable digital app and dial samples will guide fans of the timepiece into an intense personal experience which will see the birth of their own art deco icon.