Bell & Ross continues to innovate their design, and just released, is the new White Camo in the BR 03-02 line. Here is our hands-on review.

The theme is military. Bell & Ross began their venture into the military with the Phantom concept, released in 2007 and the Commando in 2009. The launch of these watches are inspired by aeronautical instrumentation. And were among the first watches to feature a camouflage coating. Nearly 10 years later, the 2017 BR 03-92 Black Camo was added, and a special limited edition BAPE Green Camo in late 2018 injected some frenzied excitement, selling out all 25 pieces before we could even publish the review. Bell & Ross BR 03-92 White Camo. While the press photographs showed the watch in juxtaposition with the white camouflage military uniform used in winter – featuring white and grey colour theme, in Singapore, our hot and humid weather meant that the only camouflage we had were either jungle green, or the sand brown in the hat the BR 03-92 is resting on in this photograph.

The military code and design language is now extended to the new White Camo.

Camouflage was first used by the army during First World War. Its purpose was to hide or disguise men or objects. Green, khaki, brown, black and grey are the most used colors. The matte treatment of these colors is a mandatory condition imposed by the military. The BR 03-92 White Camo is a design which calls for a military type tricolor coating of white, light gray and dark gray which takes its inspiration from the camouflage in alpine soldier’s uniforms. The case is in the standard dimensions and shape of the BR 03 square series, and crafted in a matte black ceramic. The dial layout and selection of the indices and hands being consistent throughout the range. The case itself is matte-black, with the dial in the white/grey camouflage in its distinctive patch pattern. This pattern is repeated on the strap, and finished in matte. The Bell & Ross literature talks of the use of serigraphy as a technique to design the dial and adapts it to the bracelet. Three serigraphy masks were created – a dark gray – a light gray – and a white one in order to affix it to the calfskin strap. A separate black leather strap is included with every watch. This presents a superb camouflage, making it virtually invisible, especially in the dark. A matte treatment for the entire watch is applied to avoid the risk of undesirable reflections. The dial is a two piece construction, with an upper plate which is screen printed and cut to reveal the lower plate. This sandwich construction is similar to the ones used in Panerai for their dive watches. In the BR 03-92 White Camo, the tips of the hands and the lower plate is covered in black SuperLuminova. In bright light, it appears black, but has a green lume in the dark. Indeed the black tips of the hands makes some sacrifice on the legibility of the dial in good light, but the scene changes in the dark. It shines (literally) when darkness falls, as the lume is quite bright. We have always wondered if this might be possible source of detection when making night maneuvers. And in a discussion we had with Luminox sponsored former Navy SEALs personnel, we were told that this is not necessarily the case, as the light of the lume somehow does not carry far into the dark. Perhaps the intensity is still relatively low, and being tightly defined around the markers and hands look very small at a distance. The up side, of course, the lume makes legibility of the time a breeze.

But most BR 03-92 White Camos will probably not see military action, rather will adorn the wrists of chic individuals “fighting” in the urban environment as street fashion statements. To this end, we think it is ultimately suited. The vibes are cool, and is right at home among the clothing choice of hypebeasts everywhere.

The caseback is sealed with a ceramic back which is secured by 4 screws. This provides the case with a water resistant rating of 100m. The movement within is the Bell & Ross BR-CAL.302, which is a Sellita SW-300-1. The movement is a workhorse movement modelled after the ubiquitious ETA 2892. Bell & Ross has pressed it in use in a huge variety of their watches, being used in both the square cased as well as round cased watches. 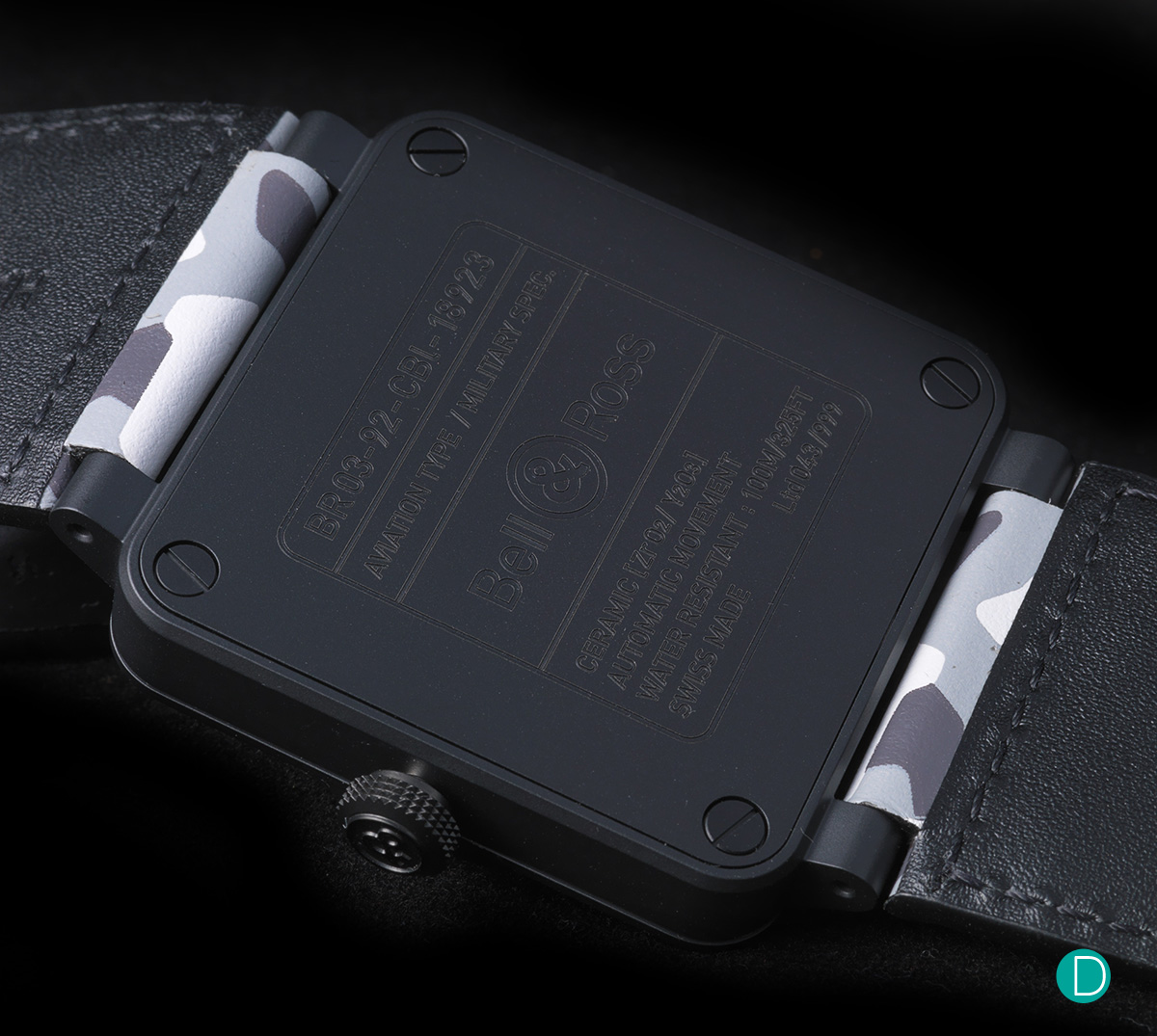 We did not see the movement finish, but knowing Bell & Ross, we are assured that the finissage will not be spectacular at all, but rather run of the mill and appropriate for the price target. The movement is very robust, and reliable, and will be sufficiently accurate for use as a daily beater.

We intentionally left out the Competitive Landscape section, as we were not able to think of a square watch with a white camouflage motif to compare it with.

On the wrist, the square case does feel a bit different, though not enough to be awkward, it does have a presence which speaks louder than a regular round one. Comfort is average, as the case does not curve over the wrist, and the shape makes it stick out a bit. Your mileage may vary. But what strikes us is the beauty of the design. The camouflage dial and strap works nicely. The matte finish of the ceramic feels very nice to the touch, smooth to the hand. At S$ 5,600 it is neither expensive nor inexpensive, sitting in a rather neutral territory for a well designed urban accessory, essential for daily use. As mentioned in the caption of the opening photograph, the Singapore military uses a digital green jungle camouflage pattern. We admit, the BR 03-92 doesn’t really go with this green camo. But it does match nicely with urban clothing much better.