The Grand Seiko Spring Drive  Chronograph is a monumental step taken by the giant Seiko Corporation to make a complicated watch based on their ground breaking spring drive technology. True, this year, they have announced a tourbillon from their Credor collection (review forthcoming), but the mainstay of their products are three hand watches, with the odd GMT. The SGBC003 Spring Drive Chronograph was introduced in 2007 and is an in-house developed column wheel chronograph with the Caliber 9R86. The innovative movement is now updated to Caliber 9R96 in the Grand Seiko Spring Drive Chronograph Black Ceramic Edition. The case, hands and dial

This new edition comes in an enlarged case. The base case is in Bright Titanium, a special Seiko concoction of titanium which is claimed to be more than 50% harder than regular titanium, it now comes clad in a high tech zicronium ceramic. The ceramic is black and clad the sides of the case and is the material for the bezel as well. This is not the first time Seiko has used ceramic on the watches. The 55th Anniversary SGBC013 was the first to feature ceramic, and it had a ceramic bezel. 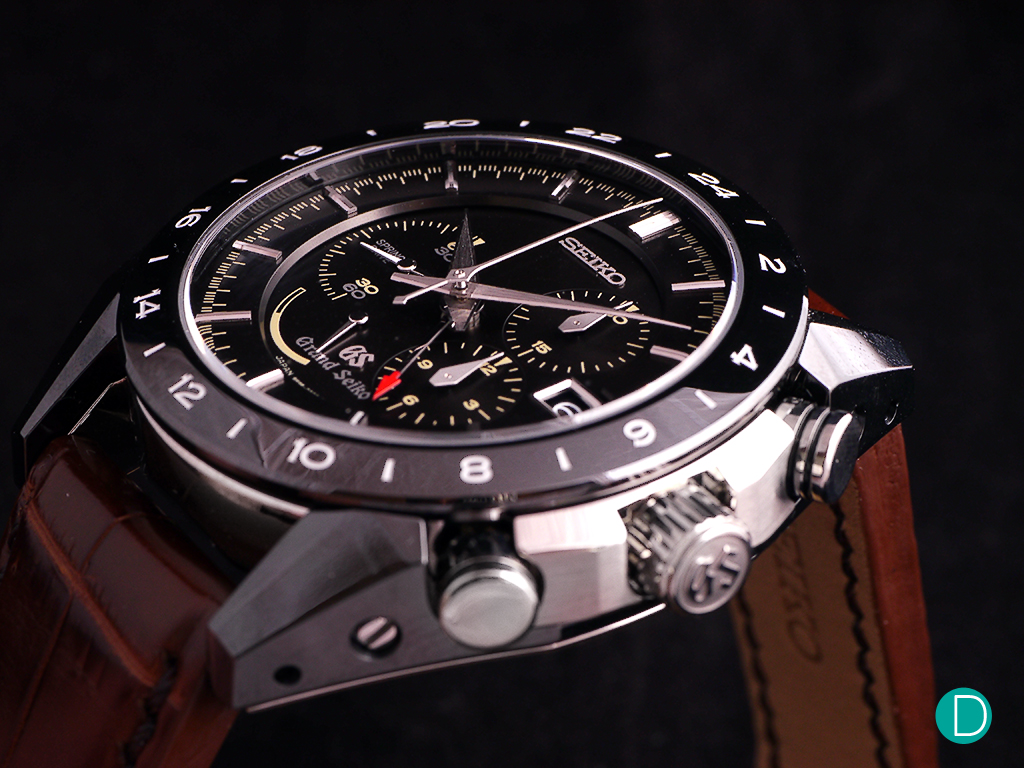 The case side, showing the pushers, and the ceramic panels which are attached via screws to the titanium case.

The cladding is very well done, and at first glance it looks like the entire case is built from ceramic. But the tell tale signs of screws on the side panels and the crown guard reveal the story. The case is also now larger than the earlier Spring Drive Chronograph models, going from 43.5mm to 46.4mm, while the thickness remain the same at 16.5mm.

Comparing to the earlier models, the pushers are now direct action, instead of screw down, and proportionately smaller. Some commentators have found fault with the SGGC001/003/005/013 with the size of the pushers. While I never had issues with the pushers on my SGBC003, but with the Ceramic Edition, the critics are now silenced. The two versions available have different dials. The SBGC015 (limited edition 500 pieces) shown above has the classical black dial. And the SBGC017 (limited edition 600 pieces) shown below has a magnificent green dial. The forest green dial is decorated with little tree guilloché motif which is inspired by Onbashira (御柱), a festival that is held every six years near Lake Suwa in Nagano. The festival has run, uninterrupted for some 1200 years ,in the Suwa area is where the Seiko’s Spring Drive manufacture is situated in the town of Shiojiri. Onbashira starts with the felling of large trees, with the resulting logs being dragged and ridden down the mountain. The Onbashira festival which has run uninterrupted for 1200 years inspires the green dial and the tree motif.

This dial is quite special, and the tree guilloché motif is quite beautiful, as is the green dial. The green is very dark, showing the emerald hue only at certain parts which catch the dark.

In both versions, the dial is now also multi level, and creates a sculptured three dimensional look. Aesthetically, this is more interesting than the flat dials of the SGBC001/003/005, but is perhaps required to provide eye candy as the case is now larger.

The hands are magnificent as in any Grand Seiko. The faceted hands are laser cut, and are razor sharp. The facets are all polished. The top of the hands get a brushed finish, and the sides are almost like a chamfer is highly polished to a near mirror finish.

The 24 hour GMT hand is a useful feature, which is also present in the earlier editions.

The movement: The Caliber 9R96

The movement is now the Caliber 9R96, first seen in the Spring Drive Chronograph 55th Anniversary Limited Edition. Compared to the Caliber 9R86 found in the SBGC001/003/005, there does not seem to be any visual clues on the changes made. Perhaps there is none. But the accuracy is now improved to +/- 10s a month versus +/-15 seconds a month. The finishing is top grade. Every traditional finnisage is executed in excellence. Anglage, fausse côtes, polishing, sand blasting is all beyond reproach, although we note the approach is more a very high level workman’s achievement rather than a fully decorative approach which Seiko reserves for the Micro Artisan Studio pieces. These command a different (much higher) price. One such example is the newly released Grand Seiko SBGD001 Spring Drive 8 Day Power Reserve.

The Nagano Stripes is not a direct copy of the Côtes de Genève used in Swiss watches, but one which though is made in the same methodology, looks decidedly different. A Grand Seiko Lion of Seikosha medallion adorns the oscillating weight. The movement, though is regulated by a quartz crystal, is fully traditional up till the fourth wheel. Instead of an escape wheel and the mechanical balance system, the Spring Drive movement features a glide wheel which turns continuously only in one direction, and an electromagnetic braking system to regulate its speed to a constant 8 revolutions a second. (edited for typo on the speed of the glide wheel) The glide wheel and on its right, the fourth wheel, on which the continuous seconds hand is affixed to its arbor on the dial side. Also visible further right is the column wheel.

In terms of operations, the chronograph is excellent. The pushers work perfectly. The start, stop and reset all require just gentle and equal pressure to activate. Not all chronograph achieve this level of finese. But the Seiko Spring Drive Chronograph 9R series all achieves this easily. Nearly on par with legendary chronographs like the Lange Datograph Auf/Ab, where the pushers are buttery smooth, and the pressure to activate the start, flyback, stop and reset are equal, precise and beautifully damped.

The competitive landscape is rather thinly populated. It is a limited edition, ceramic clad column wheel chronograph retailing for ¥ 1,400,000 or US$13,000 before taxes.

The first apparent comparison might be to its own siblings. The Grand Seiko Spring Drive Chronograph SBGC005 (US$ 9,100 in titanium case and bracelet) and SBGC013 (US$ 10,500 in titanium case and bracelet, limited edition of 400 pieces) are possible competitors. Both are in a titanium case. The SBGC005 carries the older movement, which is also used in the SBGC001/003 (US$ 7,700 in steel case with bracelet. The 001 has a white dial, and the 003 a black dial). And the SGGC013 is also limited edition and with the new 9R96 movement and a ceramic bezel. Both are smaller at 43.5mm case diameter as neither has the ceramic cladding which increases the case size. Finishing on all the Grand Seiko models are, for all purposes almost identical. The other popular model which we should compare to is the Rolex Daytona 116500LN (CHF 11,800 which converts to US$ 11,800 approximately) This is a wildly popular chronograph, the Rolex Daytona is the only one which has maintained a very high demand for the last 25 years or more. The latest iteration now comes with a ceramic bezel. Equipped with the Caliber 4130 movement with the new specifications of accuracy to +/-2 seconds a day, it is a formidable competitor. The Rolex namesake and its tradition for holding high values in the secondary market is probably the best in the industry. A Rolex Daytona with a Paul Newman dial, purchased new in 1970s for perhaps US$ 800 (yes sub US$1k) is now typically fetching upwards of US$ 180,000 in good condition. Of particular importance is how well the Paul Newman dials have been preserved. Good examples command huge premiums. Even for the older Ref.16520, used examples now carry a premium over its retail price when it was sold new. And we see the Ref. 116500 to be no different. For this, and its lower price, it might seem prudent that the Daytona is perhaps the better buy. But we must remember that it is in stainless steel (the steel SBGD001/003 is much less expensive than the Daytona), and there is a premium to be paid for a titanium case, and perhaps a bit more for one clad with ultra hard ceramic on its sides. Plus the premium for the rather small (especially for a Japanese manufacturer) limited edition run. Difficult to make a real recommendation.

The Grand Seiko Spring Drive Chronograph Black Ceramic Edition is a remarkable watch. We love it. The aesthetics work. The movement is a true gem. The finishing of the case, dial, hands and the movement is top class. Nothing to criticize there. If we had to pick one area, its the legibility in the dark. Its legibility in good light is excellent, as the contrast on the dial is par excellence. In the dark, its lack of use of any luminous material makes it hard or impossible to read. On the wrist the 46,4mm case does not seem to be overly large, but we fear for smaller wrists than our editor’s, it may dwarf the wearer. As can be seen, the SBGC017’s green dial can appear to be very dark from some angles.

Of the two variants, our preference goes to SBGC017, with the magnificent green dial. Love it!