2017 is well and truly on its final legs as we approach the final festive season of the year: Christmas! Perhaps the best thing about Christmas, at least for those who do celebrate it, is the tradition of giving and receiving gifts from friends and loved ones. Without further ado, here are 2 watches from our archives that I personally would love to see under my Christmas tree or in a stocking. Fingers crossed!

There are few watch lovers out there who don’t love a good chronograph. Whether one actually has a use for the timekeeping function or not, the honest aesthetic of having subdials and chronograph pushers is an appealing one. As far as chronographs go, the Chopard Mille Miglia is firmly ensconced as one of the go-to watches in the category. While certainly not as storied as perhaps the Daytona line from Rolex or the Speedmaster from Omega, I’m a fan of the highly involved dials that the Mille Miglia series tends to produce. Large, legible subdials with oodles of lume to go around, plus the beautifully sculpted traditional pushers seal the deal for me.

The red accents in the form of the chronograph seconds hand and 1000 Miglia arrow, both centrally sited, take the watch to the next level. Throw in the thickly lumed hour markers and broad hour and minutes hands, and we have a winner. Adding to the overkill (can there ever be too much of a good thing?) is the subtly greyed and snailed subdials at 3 and 9 o’clock giving a nuanced yet balanced look to the dial. There certainly is an argument to be made for the dial being almost too busy, but one man’s meat might be another man’s poison. It just so happens that this looks pretty delicious to me! The case comes in at a large 46mm, but given how much is crammed into the dial, it would almost be inconceivable for it to come in a smaller size. The traditional pushers tug ever so persistently at my heartstrings, given my love for vintage watches and their design language. The material employed for the case is stainless steel, and the movement finishing is ever so spartan. But why should it be anything more? It is a sports watch from start to end, and the design choices reflect that: it is surely easier to read your lap time (or to check how long that meeting has been dragging on for) with a large dial. Do read our review for a more in-depth look into the Mille Miglia!

Grand Seiko has been making waves in the horological world since its inception in 1960. From smashing timekeeping records in the mid 20th century, to their revolutionary Spring Drive, not to mention the supreme levels of finishing it offers, including a Grand Seiko into this list was a no-brainer. Since coming into their own just this year by establishing themselves as independent, what better way to kick off what promises to be a ride from strength to strength than a reissue of THE original Grand Seiko? The SBGW 253 is pretty much the polar opposite from the Chopard Mille Miglia I chose above: it’s nowhere as large, it’s not even remotely sporty, and it’s time-only. But it exudes a thoroughly romantic charm that only a 3-hander can, and I especially love Grand Seiko’s nod to its past by making their first watch, as an independent, a tribute to its original first watch back in 1960. 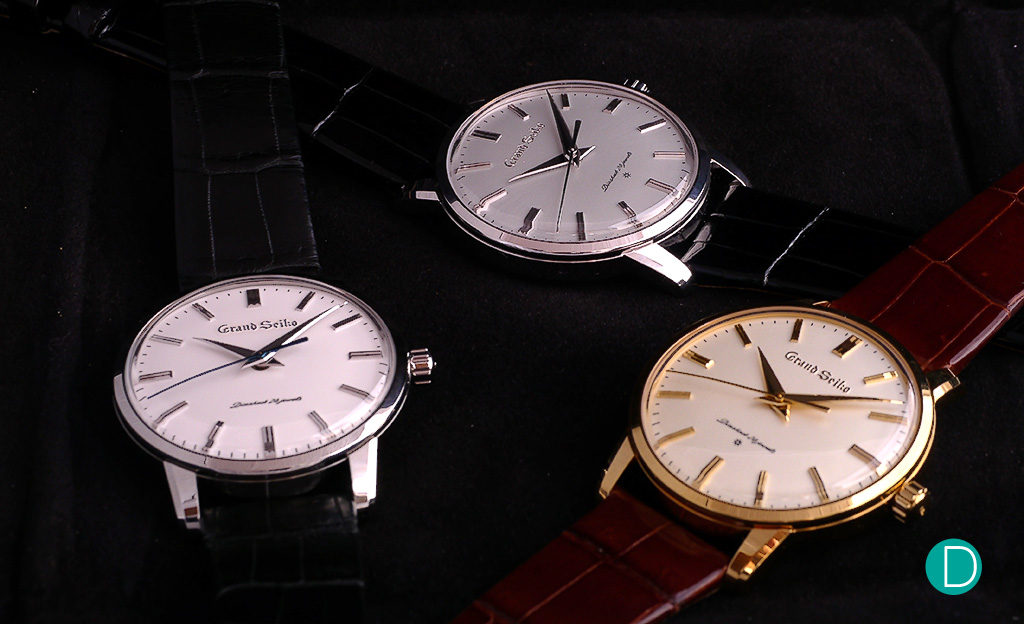 The SBGW 251/252/253 are the essentially the same watch in platinum/yellow gold/stainless steel, in a limited run of 1960 pieces for the steel, 353 for the gold and 136 for the platinum. The stars are present on the YG and Platinum models to distinguish them from their stainless steel brother.

A common gripe about Grand Seiko is their tendency to produce relatively tall watches, but being a re-issue of a vintage watch, they have appreciably trimmed the SBGW 251/252/253 to 10.7mm for the platinum SGBW251 and gold SGBW252, and 11.2 for the steel SBGW 253. The clean, timeless aesthetic of the dial with its minimalist look is one I could gaze at all day, and then some. The very sartorial nature of the recreation is what would make me want to wear them over and over again without tiring. Feel like pairing it with a polo shirt and chinos for a Sunday champagne brunch? No problems there. Want to wear it to work with a suit and tie? It’ll slide right under your cuff. There is little that I can say that hasn’t already been waxed elegant about this re-issue; it’s that good. Two words: timeless elegance. It’s not hard to see how the new Grand Seiko has kept true to the original piece as pictured on our Chief Editor’s wrist here.

Throw in the proprietary Grand Seiko Zaratsu polishing and impeccable attention to detail, this piece has captured my heart over and over. The manually wound  9S64 movement has a 72 hour power reserve keeps time with a very respectable -3/+4 seconds maximum deviation in daily rate. The platinum model however, is adjusted to -1/+5 maximum daily rate deviation. It’s almost a pity that the caseback is closed, with the embossed Grand Seiko logo and lion etched in sharp relief centrally, but this is absolutely in keeping with the original piece from 1960. Changing that would perhaps kill the old school charm.

Edited to correct typo: SBGW instead of SBGD. Thanks to Marcel for highliting in comments.

What are some watches that you would love to receive or give to friends and family? Leave your choices in the comments section below!