In the 80s and 90s, Corum was carving a niche (and market share) with their brand of distinctive, fun watches; In recent years, Corum’s prominence (while diminished) never fully disappeared, testament to the strength of their brand icons and the ingenuity of the maison. Often underrated by the WIS (watch idiot savant) community, Baselworld 2016 saw an opportunity for the rebirth of new Corum under the auspices of Davide Traxler.

With over 15 years of luxury experience in senior positions of the industry’s most celebrated names like Bulgari and Chopard, Citychamp (formerly China Haiden) announced his appointment as Montres Corum’s newest Chief Operating Officer in September 2015.

“The question almost offends me. It’s a public company and I resent the question.” – Davide Traxler, Chief Operating Officer of Corum on the subject of Chinese ownership (read on for his complete response) 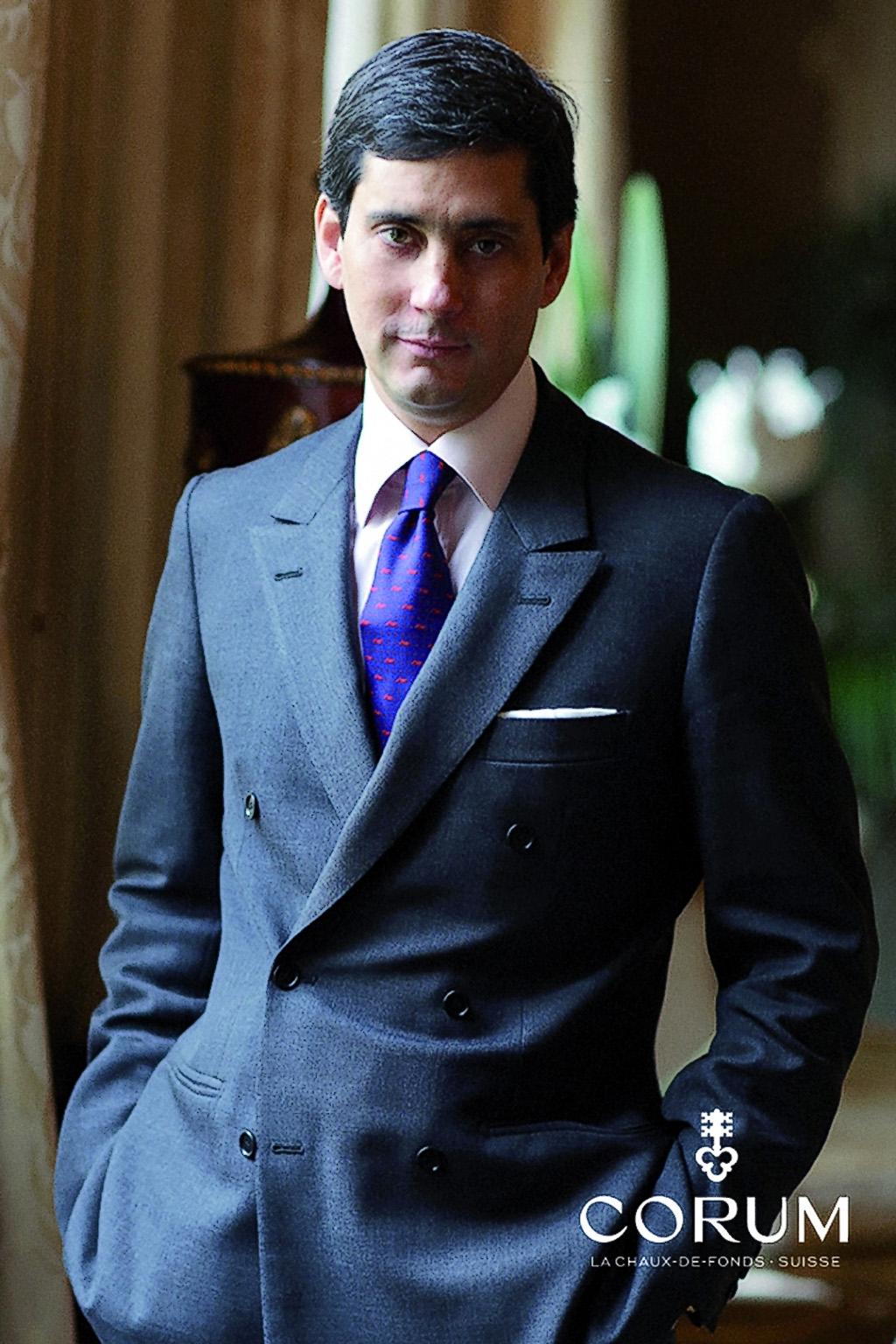 A Path for New Corum

Spend five minutes with Davide Traxler and it immediately becomes apparent that the New Yorker born to Italian parents serving in the diplomatic corps is equipped with sharp wits and an inquisitive mind – qualities needed to navigate a brand through the stages of latent resurgence. His is a multi-cultural background developed from an early globe trotting lifestyle and with the mind of polyglot (Portuguese, Italian, French, German, Spanish), his interview in English (where he never once falters) is one which gives one of the industry’s most honest and unguarded insights; a rarity where almost every interview is politically correct.

After spending 2015 consolidating Corum’s watch collection and re-positioning its brand icons, it almost feels like ‘new Corum’. What sort of shape do you feel the brand is in for Baselworld 2016?

Corum is on the road towards balance. We are currently too small for who we are. We are eager to grow 30% in 2016.

When you say that Corum is too small at the moment, could you clarify what you mean?

Corum was much bigger in the past and the changes in the last few years were less market focused but rather management restructuring through cleaning our finances, stocks, processes and product offerings. Now the machine is properly tuned and the newly revitalised Corum is ready to race again. The new Corum Bubble Collection is one of three newly re-imagined heritage products from the maison.

What do you hope to achieve with something like the Bubble collection?

The Bubble collection is an icon. Many people have fond recollections of the Bubble, in fact when they’re told that Corum stopped the collection in 2005, they can’t believe it. The Bubble is still very much present in the minds of watch fans. It’s the fun side of watchmaking for the affluent who want something with a twist.

How do you see the new Bubble collection over the newly redesigned Admiral’s Cup collection, do you feel they fall into gender-defined segments of feminine and masculine design?

I think they’re made to appeal to both genders but I also think we have the advantage and challenge of defining within the Corum brand, three identities or worlds – the Admiral’s Cup, the Golden Bridge and the Bubble. It’s a challenge because it’s not the same “world”. It’s an advantage in that it gives us more resilience if a competitor comes out with competing designs. How important is design and technical innovation for Corum at this stage?

It’s key. We have to be faster. Today, design-wise, we have the Bubble and then we have the new movements introduced in Corum’s Admiral’s Cup collection while still having to innovate on the Golden Bridge. That said, the immediate feel and perception for the consumer is the look, so it has to look right and design has to grab your attention first.

Corum is using Eternamatic movements now, do you feel it’s at all important to go back to being a manufacture and using your own manufacture movements?

Absolutely not. There are somethings we are good at and with the three new movements introduced, we are very well positioned on price. It’s important to be competitive, there are things other people do better than us and we’re happy to buy from them. It’s the same for distribution, we presently do not own any mono-brand boutiques, they are all owned by our partners; retailers do retail better than we do and we do not want to do their job. Our job is watchmaking.

In this economic climate, are there any advantages to being Swiss-made yet Chinese owned?

The question almost offends me. It’s a public company and I resent the question. We are Swiss watch company in the same way that Rotary remains English and Eterna remains Swiss.

To be Italian in the 70s in New York, you were discriminated against but in the 80s, you suddenly became cool- Valentino was hot; Italian food became everyone’s favourite overnight, all of a sudden, it was the trend to own things of Italian heritage. – Corum COO Traxler on how perceptions change

Would you like to use this opportunity to respond to critics who continue to have nagging doubts over such a divisive matter?

I’ll tell you the reality. I was born in New York and my father was Italian. To be Italian in the 70s in New York, you were discriminated against but in the 80s, you suddenly became cool- Valentino was hot; Italian food became everyone’s favourite overnight, all of a sudden, it was the trend to own things of Italian heritage. In the 70s, Italian wines were considered cheap too but in the 80s, they became sought after. If you recall, the 70s was also a period where Japan made products were considered cheap copies of American products; today, it’s a high sign of quality. My personal experience shows how unintelligent this discrimination is and I think the new Corum collection proves this.

How much of a challenge is it for Corum to evolve and yet keep heritage intact?

It’s a line we tread. I think a musician once said, “we cannot celebrate the ashes, we have to keep the fire alive”. If you slow down too much, you’re celebrating 250 year old technology, you get boring and dusty. If you go too far too fast, you kill the fire, it’s always a balancing act.

What was the road map given to you when you assumed this position or did you have to develop one yourself?

I had to develop it. My road map was to “make it work”. [laughs] When we designed the new Corum Golden Bridge, consumer desire for it was almost 100% shape and 90% of the market tends to prefer round, so we decided to make a round version.

So everything we’ve seen thus far, the new novelties, the refinement and consolidation, that’s all your strategy?

I found some products already being developed – the round Golden Bridge, the new Bubble collection and the new Admiral’s Cup with bigger flags and then taking ideas and strategies from what I’ve seen around the world, I decided to implement the shared vision of what people expected from the brand. I received unanimous feedback and then it’s not difficult, you supply what’s in demand.

On the Admiral’s Cup collection, people wanted to see the return of the strong flags again and they wanted the watches a little thinner especially for the 42mm. On the Golden Bridge, the desire for it was almost 100% shape and 90% of the market tends to prefer round, so we decided to make a round version. Finally, with the Bubble, people wanted something fun again.

It sounds like you had your ears very close to the ground but as a Chief Operating Officer, how do you manage your own ideas and visions (ala Steve Jobs-style). Do consumers really know what they want?

I think the market talks to you and you should listen. I believe there’s only one Steve Jobs and the rest of us are normal, sometimes you get lucky and I’ve always had one quality in my life – that I’m always lucky. [laughs]

What are your priorities now in terms of communication and distribution?

I’m happy with distribution, the focus this year is Southeast Asia and Hong Kong and Middle East.

Just to revisit distribution, can it be inferred from your strategy that you think it’s a bad idea for brands to have their own mono-boutiques?

I think it’s a bad idea. It make sense if you’re a jewellery maison but if you’re a watch brand, it makes no sense. I think the customer isn’t faithful to a single watch brand and likes many different watches, they will however be faithful to a retailer if the relationships are good. I strongly believe in professional retailers.

The movement of the iconic Corum Golden Bridge, visible from the side window, seemingly suspended.

Are there any more changes to be had in Corum or are we set?

Before I arrived, I discovered that Corum has local teams everywhere and therefore there’s a big difference between us and other brands. We don’t send Swiss people to run subsidiaries around the world because I think they lack the cultural awareness to be in direct contact with those markets. Having all local teams gives me very diverse and very region-sensitive feedback, that I think is a huge strength. No more changes but definitely more products. A round Golden Bridge was our first new product but there are many more micro-structures to do.

Do you consider any of the pillars a little more important than the others?

No. They’re like children, different characters but all the same. I consider them all icons of Corum.