80% of watches sold may happen to be round watches but we dare you not to like the Baselworld 2017 Lang & Heyne Georg Rectangular Watch. The new Georg from independent Dresden-based Lang & Heyne, founded by Marco Lang and Mirko Heyne in 2001 is a spectacular timepiece with the in-house Calibre VIII and a leap from traditional movement architecture.

With production of around 40 pieces a year, Lang & Heyne is an artisanal watchmaker and their latest Georg is named for the 16th century Duke of Saxony. Baselworld 2017 Lang & Heyne Georg Rectangular Watch is much like its namesake in that it seeks to overturn long held beliefs and traditions – to wit: the Georg’s Calibre VIII eschews bridges for gear cocks. Much in the same vein as Duke George, unlike other inherited royal titles of his day, took steps to adjust the judicial system and deliver equality to all tiers of society while seeking to improve the lives of the impoverished even at the cost of the city’s rights. Thus, while the face of the Baselworld 2017 Lang & Heyne Georg might be well appointed if not familiar, the reverse side exposes the Calibre VIII for its transformative ideas and design – the entire movement is revealed save for the mainspring which remains in barrel and the gear train is exquisitely exposed because the traditional bridges have been supplanted by steel cocks – the effect is visually striking, not unlike GP’s three bridges and we dare say, a little more iconic given that the black polished cocks have never been seen before in this manner.

The Baselworld 2017 Lang & Heyne Georg Calibre VIII is manually-wound, as it should be given that a rotor would mar with the purist aesthetics of the movement architecture and bequeathed with a 55-hour power reserve. The subsidiary seconds on the Georg are hacking, thus a pulling the crown to position one actuates a lever to apply the brakes to the balance wheel for precision time adjustment. Notably, the Lang & Heyne signature diamond topped endstone for the balance is present and distinctive. The case of the Lang & Heyne Georg is a stately 40mm by 32mm, the thinness of the 9.4mm Georg is lightly curved to taper around the wrist, the Calibre VIII movement itself isn’t curved so we suspect that the watch could be made thinner. In terms of dimensions, it’s comparable to most rectangular watches, most notably the Reverso. 3 case types – rose gold, white gold and platinum frame the gorgeous white enamel dial with art deco numerals and blue accents. The sub-seconds counter is larger than most and thus becomes an element of design prominence in terms of aesthetics. 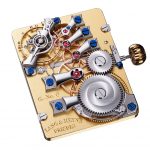 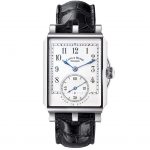 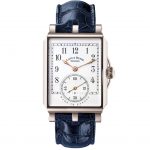 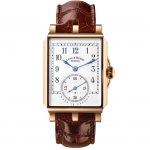