We’ve all been there at some point: staring at a watch, completely enthralled by its sweeping seconds hand. (Don’t worry – it’s a normal WIS trait!) Rather than a ‘tick-tock’ advance each second, mechanical watches are characterised by their distinct “heartbeat” which results in a seconds hand that more or less glides in one continuous motion. Not all movements are created equal, however. Whilst all mechanical movements beat they do so at different rates, resulting in variations on how smooth the hand sweeps. But have you not wondered about their significance? Today, let’s geek out and find out in our brief exploration of the topic.

Note: Industry jargons such as ‘High-Beat’ and ‘Low-Beat’ are used to classify movements, but definitions are not standardized, though here we attempt to categorise them. This list is also non-exhaustive as there exists several exotic pieces whose beat exceed conventional norms. We will also omit the Grand Seiko Spring Drive since it does not have a beat rate, but the seconds hands glide absolutely smoothly, with no steps. But, we highly recommend you give our feature article on Spring Drive a read here.

Let’s begin with the basics…

All mechanical movements work on the principle of precision math and physics. A fully-wound mainspring stores energy and acts as the main power source. As this spring unwinds its force is regulated via a series of gears, released slowly to drive the balance wheel, essentially a weighted wheel which oscillates back and forth at a constant rate. A device known as an escapement then converts this movement into useful rotation which drives the hands. 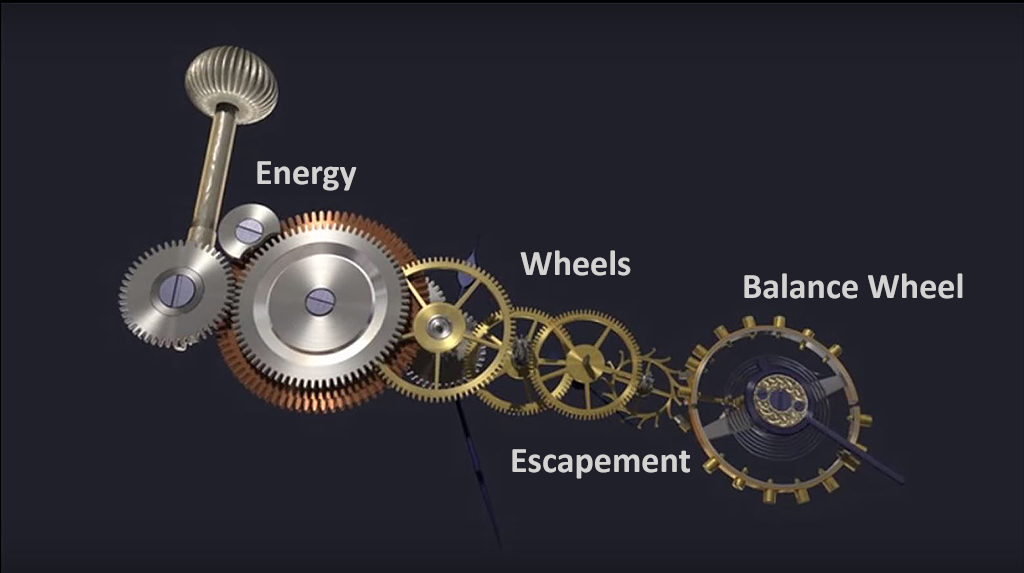 A single swing (in either direction) of the balance wheel produces one vibration, or semi-oscillation. Hence a swing both ways produces a single oscillation. The frequency of a watch movement can be expressed in Hertz (Hz) or in beats per hour (bph). The number of Hertz is the oscillations per second. Multiplied by 2 will derive beats per second. A further multiplication of 3,600 (number of seconds per hour) will result in beats per hour. Using this formula, a watch oscillating at 18,000 bph makes 5 beats per second and runs at 2.5 Hz. Geeky? – yes. But rather logical. So far, so good.

For a clearer picture, check out our videos of watches in slow motion here.

Early watches were typically fitted with low-beat movements, running at 2.5 Hz (18,000 bph) or 3 Hz (21,600 bph); an average among manufacturers across the board. This is partly due to a lack of material and lubricant technologies which prohibited a higher beat rate from going mainstream. Still, one major benefit of low-beat timepieces is their overall reliability: a slower balance wheel would produce less friction and wear of individual components, prolonging the life of the watch. It also allows for a longer power reserve, because it uses less energy. However, in theory the movement is also more sensitive to external disturbance from daily wear which results in timing errors and damage. That said, in practice, we do not find any evidence which suggests a co-relation between lower frequency and accuracy. When regulated properly, a low-beat movement will easily pass COSC tests (for example, the Grand Seiko chronometer-grade caliber 3180). The first Grand Seiko housed the caliber 3180. Though the movement only ran at 2.5 Hz, it was able to be chronometer certified. A good example of a finely tuned movement with excellent attention to detail. Picture Credit: thewatchbloke.co.uk

Although not a common standard today, there still exists several pieces which boasts the 2.5Hz speed. It is typically reserved for traditional and avant-garde pieces. Notable examples are the A. Lange & Söhne Datograph Perpetual Tourbillon and the MB&F Legacy Machine. We highly recommend you check out their respective reviews. In many of these examples the balance wheel will be noticeably larger and hence heavier. The increased weight would reduce the moment of inertia and, operating frequency.

Sidebar: The slowest watch – if such a thing exists – goes to the Antoine Martin Slowrunner. Beating at just 1 Hz or 7,200 bph, its seconds hand possesses a tick akin to quartz. The balance wheel is a record-setting 24mm wide and occupies the entire case back. The company is now defunct, but the Slowrunner still holds the record. The Antoine Martin Slowrunner, beating at an ultra slow frequency of only 1 Hz takes the cake.

The other low-beat speed standard is 3 Hz (21,600 bph) – arguably the most popular in contemporary and traditional watchmaking. In fact, the ubiquitous Seikos and haute horlogerie manufacturers currently utilises this speed in several calibers. Many collectors view it as striking a balance between high-beat accuracy and low-beat reliability.

The Omega Speedmaster Professional is powered by the 3 Hz caliber 1861. Looking at the seconds hand sweep in 120 fps slow motion, we count 6 distinct ticks between each second marker. A relaxed beat; neither rushed nor delayed. Rather nostalgic too – not forgetting it was the watch which saved Apollo 13’s crew.

High frequency movements were introduced by watch manufacturers in the late 1940s. Developments in synthetic lubricants made such possible, leading to an “arms race” at it. Today, a beat rate of 4 Hz (8 bps) is common with a few watches even beating at 5 Hz (10 bps). Many of these movements generally outperform their slow beat counterparts of comparable quality. At the risk of repeating, a higher beat rate does not mean better accuracy. Rather, superlative accuracy is easier attained with a high-beat watch than it is with a slower-beating timepiece. A higher frequency provides a more stable rate which aids in smoothing out irregularities. The Grand Seiko Hi-Beat is perhaps the only mass produced high-beat timepiece currently, apart from the Zenith El Primero.

A faster beat also brings several advantages: better isochronism and, better shock resistance. Hence the widespread adoption of its standard. A disadvantage is the possibility for increased wear and tear as the escapement would hit the pallet fork more often. One notable example is the Rolex “Zenith” Daytona. The El Primero caliber went through major modifications, with its signature speed reduced from 36,000 bph to 28,800 bph. Although Rolex does not specify a reason, many speculate the improved service intervals. In many other cases, a higher beat watch may require more frequent servicing to retain their acclaimed accuracy.

Both are Zenith El Primero based, though very different altogether. Amongst a slew of modifications, Rolex slowed down the El Primero’s signature 36,000 bph to 28,800 bph. Picture Credits: watchfinder.co.uk & thewatchspotblog.com

We’ve established thus far that high-beat is better, to a certain extent. So why not make all movements run at 4 or 5 Hz – or faster? And what about the future of mechanical movements?

What got you here won’t get you there.

A faster beat is possible, but material science might dictate otherwise. The omnipresent Swiss lever escapement is confined by laws of physics (as is perhaps everything). But the greatest issue lies in lubrication: high speeds would cause traditional oil-based lubricants to break down faster. Hence, too fast for too long without oil and the movement would literally beat itself to death. Another issue is power reserve. The energy needed to drive the hands is (approximately) directly related to one’s beat rate. Hence, the mainspring tension and forces acting on the components grow accordingly. That said, strides are made to improve efficiency of the escapement by incorporating silicon which minimises friction and weight. But to go faster, you would need to rework the wheel. Literally. A good example is the Zenith El Primero Defy Lab. The watch utilises an oscillator, sans escapement, which comprise of only 2 components made out of silicon. The result is 108,000 bph (15 Hz), though, any frequency would have been possible. The Defy Lab also boasts an impressive power reserve of 60 hours. We highly recommend you read the full detailed review in the link. The Zenith Defy Lab – 108,000 bph (15 Hz) with an impressive 60 hours power reserve. The watch utilises an oscillator, sans escapement, with components made out of silicon.

Watchmaking is about compromise and innovating. As we approach impressive speeds of 50 Hz, the traditional balance architecture is ditched as frankly, they won’t cut it.

The subject is Zenith’s Defy El Primero 21. Its movement is composed of two trains: a regular timekeeping wheel train beating at 36,000 bph and another with a separate escape wheel that drives the chronograph beating at 360,000 bph. In place of a traditional balance wheel, the El Primero 21 uses a new patented material in the form of Carbon-Matrix Carbon Nanotube composite, claimed to be resistant against the effects of gravity, temperature and magnetism. The none-too-shabby 360,000 bph (50 Hz) allows the watch to record to 1/100th of a second. Fun fact: 50 Hz is roughly 3,000 rpm – around 70 mph in some cars. The Zenith is not alone using this technology. Sister company TAG Heuer Carrera Mikrograph uses the same movement in their . Though a different movement development, the same concept is used in the Montblanc Timewalker Chronograph 1000.

Another noteworthy mention is De Bethune’s research into high frequency escapements. Dubbed Horological Résonique, it replaces the traditional balance wheel and escapement in favor of magnets. Although still in development, De Bethune has demonstrated a working prototype capable of 6,667,200 bph (926 Hz).

When it comes to pure mechanical prowess, speed isn’t everything. There are more important aspects which takes precedence – quality components, skilled craftsmanship and fine adjustments – all of which are quite achievable on “low-beat” timepieces.

Then the case for shock resistance. As it stands, a high-beat movement will resist shocks better than a lower-beat one. This is because the higher frequency is better able to deal with the effects of gravity pull on the balance when it endures a sudden shock, allowing it to recover quickly. That said, most low-beat movements incorporate a shock absorber to cope with external disturbances. An example is Seiko’s Diashock shock absorber as part of their Trimatic technology. Dive away!

Just as you wouldn’t judge a book by its cover, the same can be said for watches and their beat rate. Faster might not mean better; after all, quality than quantity.